I just noticed that I have a Content and Structure Reports list in my site contents. I see that it contains the CAML queries for some useful stuff.

What I don't see is that it does anything? How does this work?

I found this thread on Technet but I don't understand the answer or where I would go to see if it was running. For example that thread says:

If you had been running the query near the top of the Site Collection (e.g. http://site1 instead of http://site1/site2/site3), try running it at one of the lower subsites to see if you get results - odds are that you will see some results. Try it with a lower quantity item such as "checked out to me".

I don't see any way to run the CAML query. So how do I do that?

I also found several versions of this article that seem to only really explain what a list is and just happened to use the Content and Structure Reports list as an example.

They are mainly used within the Content and Structure area in the Site Administration section in Site Settings. These CAML fragments are what is used when using some views within Content and structure. 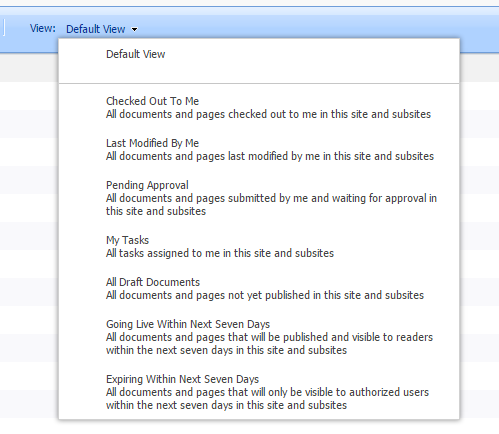 You can add to it if you'd like, I vaguely recall doing that for something or another that was asked for but not really used.

Not the answer you're looking for? Browse other questions tagged 2013 content-and-structure or ask your own question.