Using Visual Studio 2010 and CKSDEV 2010, I was able to select to set of features (right click on project, select features to activate).

Now, I'm working with SP2013, and CKSDEV 2012. This ability to deploy only selected feature has disappeared, including some other nice tools.

How can I restore the same behavior? How can I only activate my specific set of feature?

FYI, I found a workaround. I specified in my post build event this command:

Setting my deployment configuration to no activation and this will do the trick. But it's a bit of pain when dealing with multiple features.

I need specifying a specific set of features, because I build my project using:

Using Default deployment configuration, Visual Studio will enable A, B, C but will fail on activating Master, because its dependencies would already have been activated.

If I understood you right, you are trying to activate feature on deployment, there is something new in VS2012 named as Packaging Explorer.

Open Packaging Explorer and select the feature you want to access properties of, then press F4 on keyboard, it will show you all possible properties of the feature, as shown in picture below, 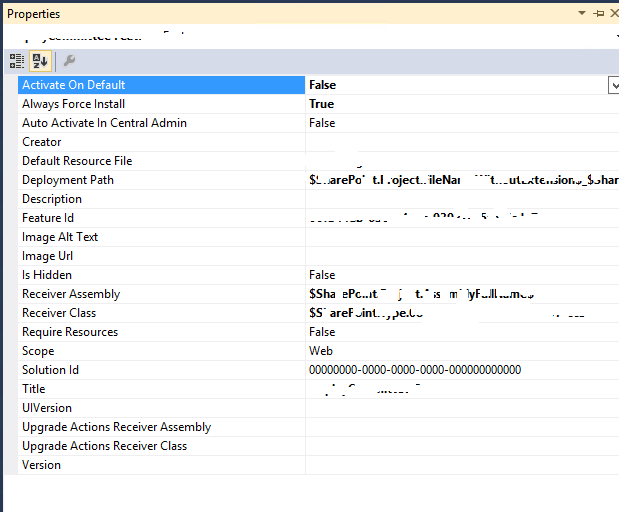 Not the answer you're looking for? Browse other questions tagged 2013 deployment cksdev or ask your own question.