What is the effect of setting SPWeb.AssociatedOwner/Member/VisitorGroup

I would like to know the effect of setting/changing the value of the SPWeb properties AssociatedOwnerGroup, AssociatedMemberGroup, and AssociatedVisitorGroup - the only effect I can glean is that it could then be read later on by other code... is that it? I have a thought that there just might be some special significance behind the scenes, but MSDN is not very forthcoming

If there's something hidden, I could presume something extra for owners and visitors (special override or admin privileges and more guaranteed read or something similar, respectively), but what might (or preferably IS) the extra effect of "member"-ship?

The Associated* groups are the OOTB Visitors, Members, and Owners groups.

You can read more about this here: AssociatedOwnerGroup in SharePoint

It doesn't appear that there would be any catastrophic changes in MSFT code if you change this, but as a best practice you shouldn't rely on this group existing as it could have been deleted. That post mentions this as well:

If the the association of these 3 groups is not there then if you check programmatically for the AssociatedOwnerGroup property of the SPWeb it would not return any results and your code might fail...

I would assume the properties are there to give developers a (semi-)reliable place to grab groups from in a simple security set up. Using Telerik's JustDecompile the only places these properties are used, it checks if the value is null. It uses the properties to automatically propagate the groups when you create a new site with inherited permissions, if there is no owner's group set, the site permissions are only accessible to the site owner, etc. But there wouldn't be any catastrophic effects to reassigning this or setting it to null.

Here is the output from Telerik's JustDecompile: 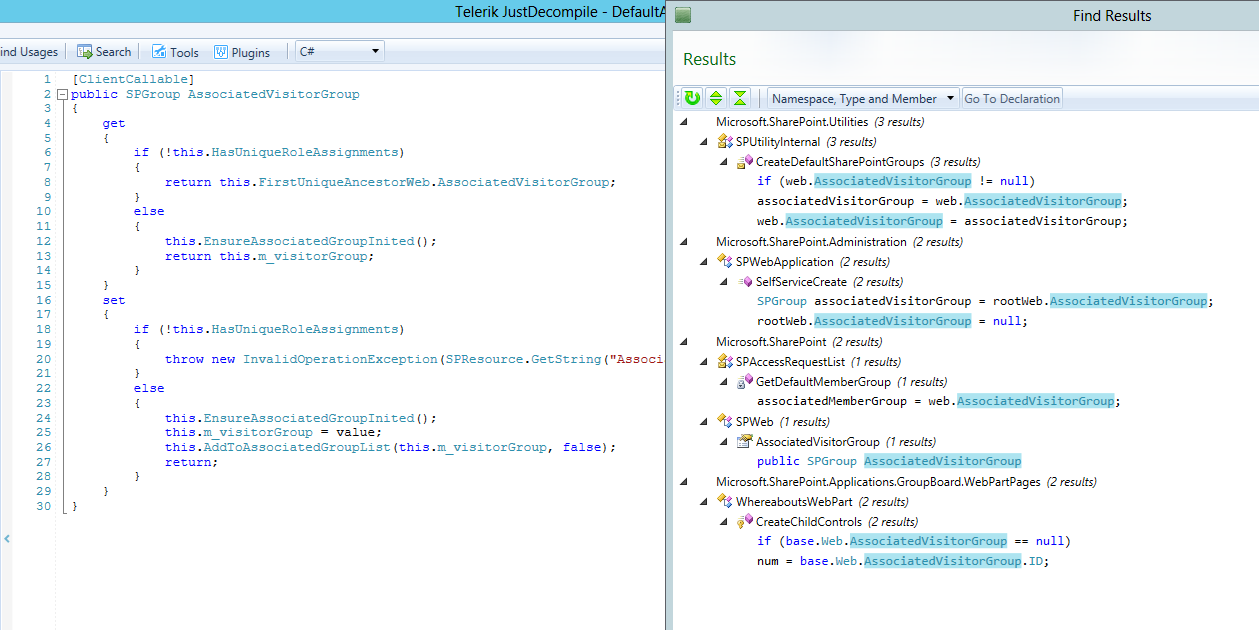 (It's hard to see, but if you right click and view image you get the full sized image.)

Not the answer you're looking for? Browse other questions tagged groups spweb or ask your own question.

2
What is the SPWeb.Name property for?
1
Delete associated member groups when team site is deleted
10
Is it necessary to call SPWeb.Update() after setting AllowUnsafeUpdates?
3
How do I get the default member and owner SPGroups?
7
What are the dangers of using a static class that contains your SPWeb object?
2
What does setting "Who can view the membership of the group" to everyone do when creating groups
2
How to check if current user is member of the current site or above member group, site owner group etc
3
Check if user is member of group
1
Effect of using multiple SPSite and SPWeb objects
2
Can a SharePoint group be a member of a SharePoint group?