I have successfully consumed a published SharePoint 2013 Search Service Application in my 2010 Farm. However my 2010 Search Scope no longer works... and you can't create Search Scopes in 2013.

So, how do I configure my 2013 farm to mimic the search scope? I'm not sure if this would be a Result Source or a Query Rule... I've used the same name for both and it still doesn't work, so I'm now trying a full crawl. 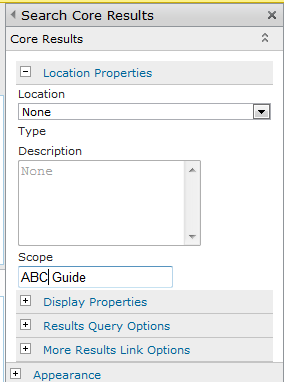 As I say, in 2013, I have an "ABC Guide" result source (and Query Rule for testing): - Query Transform: {searchTerms} path:"http://server/business/guide"

Interestingly, the People Search Core Results Web Part (which works in 2010-->2013)doesn't define a Scope in its "Location Properties". Somehow it must apply its filtering another way?

The actual error I get is: "Scope in your query does not exist".

You have to define the Search Scope within the SharePoint 2010 Site Collection. The scope definition will get shipped to the SP2013 service application and compiled there. So far I've only defined Scopes that limited the result set by folder. The drop-down for properties in a property-based scope isn't populated for me.

Generally, you would use a Result Source. Can you tell me what rules you used in 2010 and maybe I can help you with the logic for a 2013 Result Source.

2
Scope in your query does not exist
3
Microsoft.Search.Query, announcement list search scope returns no results
3
SharePoint 2010 search does not crawl a specific site in the site collection
0
Creating scope using Property Query
0
MOSS custom search on new scope returns no results
1
Custom KeywordQuery ignores scope until I visit viewscopes.aspx
1
How to create a search scope for content type?
0
Web-part search from Scopes to Result Sources