I want to install a standalone SharePoint server in a virtual machine for development purposes. I installed SharePoint 2013 on Windows Server 2012 and was surprised to see that the memory usage is sky high (6GB) for a site with one document library and only 3 small files. The internet seems to say that this is fairly normal.

I have a 2 server dev environment for SharePoint 2010 with 2 GB RAM, a dual core processor and a cheap SSD. It runs fine for development and some light testing/demo. For the official test environment it's an 8 GB quad core system (single server). I've never had any complaints with these systems with these specs.

For my SharePoint 2013 environment I found it was hard to work on a single server farm with 8 GB RAM. This was basically my 3 year old work laptop. I am currently waiting until I can get a 16 GB system with an SSD.

The official minimum requirements for RAM are as follows:

But as I said, for a development environment (SQL Server on another box) 2 GB has been fine for me for more than a year.

I am experimenting to see if I can comfortably perform development on a single server installation of SharePoint (AD is on a separate system). This system has the following configuration:

Here is what my memory usage looks like with just the above and absolutely no applications running. Just over 1/2 the memory in my system is used. Once I get VS running and Outlook, it's about 10 GB used. So if you are looking to do development on 2013 and want to do it locally with less than 24 GB, I would ask myself, would you want to do development on a system with effectively 6 GB RAM? A 24 GB total is probably what most people would be conformable with in the long run. 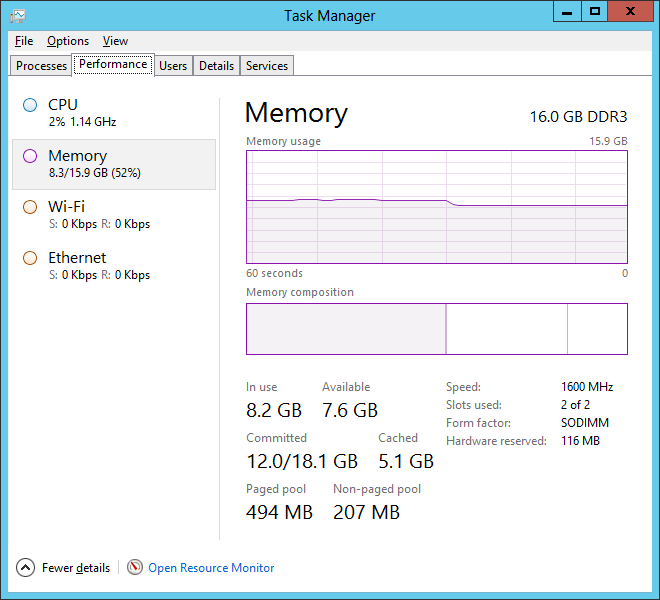 Not the answer you're looking for? Browse other questions tagged 2010 2013 or ask your own question.