In my farm, I was using the standard 1433 port for SharePoint to communicate with SQL. Our project lead came down with the order to change the SQL port to a non-standard port from 1433.

I went into SQL Server Configuration Manager and made the change to use the new port rather than 1433. I then went to my SharePoint server and ran cliconfg.exe and created the alias for the SQL server just the same as I set it up on the SQL server. The SQL server is using the new port now.

However, I rebooted the SharePoint server and it can no longer connect to SQL. Running the config wizard results in the "failure to connect to database server" error. In the configuration wizard, under "Specify Configuration Database Settings", I put the server IP:port, but it doesn't accept that either.

Is there another location that I need to change in order to force SharePoint to NOT use 1433? Our boundary protection folks verified that traffic is still leaving on 1433 from the SharePoint server, but not being accepted by SQL.

I've done numerous searches on this site, and others, and nothing has helped so far. I found this question (and the links given in the answer) to be very helpful, but so far nothing has helped: Change SQL Server Port for existing SharePoint 2010 environment - Howto

Strange it doesn't work. Just to be sure: you don't have to change anything in SharePoint. Just create an alias with the name SharePoint is referring to, but pointing to the server with the new server port: 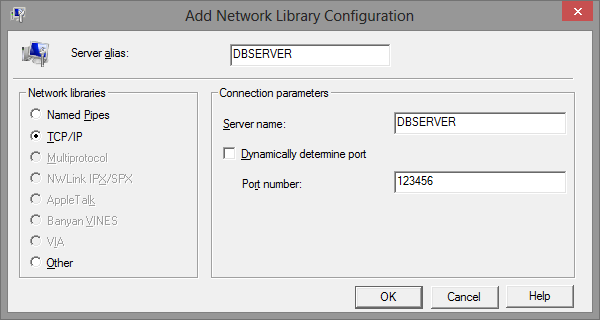 In this example, SharePoint thinks it's still connecting to DBSERVER at port 1433 but it actually connects to 123456 without knowing it.

This article more or less details the same steps:

Not the answer you're looking for? Browse other questions tagged sharepoint-enterprise sql-server configuration-wizard database-connection or ask your own question.