Short explanation: As far as usage is concerned, in many common cases there are almost no actual differences - anything you can do with a webpart you could do with a visual web part. For many points of view the visual web part is only a tool that enables the developer to work with a user control instead of creating all controls in codebehind.

Visual web part are born (afaik) from the SmartPart webpart project first seen on SharePoint 2007. The idea behind that project was to create a web part that could display any user control, so that programmer could work on ascx file as for any other web project instead to have to resort to programmatically create the controls via the CreateChildControl method.
The visual web part template introduced in Visual Studio 2010 just does this: it creates a simplified smartpart that displays the attached user control by adding it to the control collection in the CreateChildControl event. No more no less.

Waldek does a great job in is blog listing all the main differences: here is the link. What follows is just an extract of his notices, reposted to avoid link rooting. Also notice that as posted by almostSharepointMaster in his answer, you should also have a look at this page from Microsoft which also provides some samples. 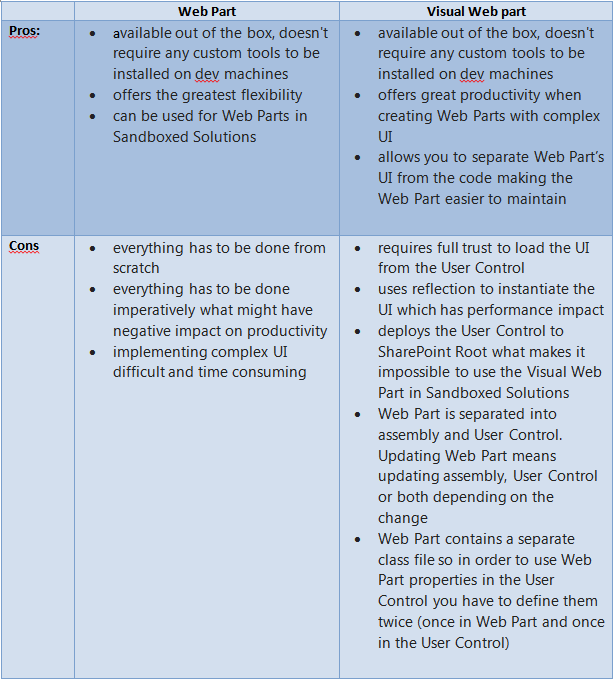 a webpart is where you create your controls and everything else within it.

In Microsoft Office SharePoint Server 2007, developers create Web Parts by deriving from the WebPart class. One of the challenges that you face when designing a Web Part that has a complex user interface (UI) is the lack of drag-and-drop support. You must write the code from scratch, in the CreateChildControls method, to create the layout design of the Web Part, which can be time consuming.

An alternative approach can save development time:

the main point to take note of is this:

for more detailed info with advantages and disadvantages check:

btw im creating a visual webpart at this moment and its a bit of a pain but easier for the designer to ammend. Webparts for me is better to code by that i mean takes less time. Why? becuase i still have to make the ascx and the webpart to host the ascx :(

Not the answer you're looking for? Browse other questions tagged 2010 web-part sharepoint-designer visual-studio visual-web-part or ask your own question.