Making identical copy of a server as a standalone for testing

I'm currently trying to make a "copy/clone" of a production server as a standalone one I can run on my laptop. I want the production and my own sharepoint server versions to be the same so that I can do backup and restore of site collections both ways. As i started by upgrading my server, which was a previos, a bit outdated, version to match the server's at first I looked at the version number under Central Admin>System Settings>Manage servers in this farm. Of course, later found out that said version number was not enough for two servers to be identical.

After matching the installed patches shown in Central Admin>Upgrade and Migration>Check product and patch installation status I installed the missing packages(language packs, updates, CU and SP1, for both english and italian when required), or so I thought.

However there are still differences between the two installations even though I used the production server's KB version numbers to download and install the needed upgrades.

It comes quite close to my problem. When I checked the production server it seems to have those packages in the incorrect version 14.0.6028.1000, instead of 14.0.6029.1000. Problem is, those packages don't even show on my standalone server.

as opposed to the production server: 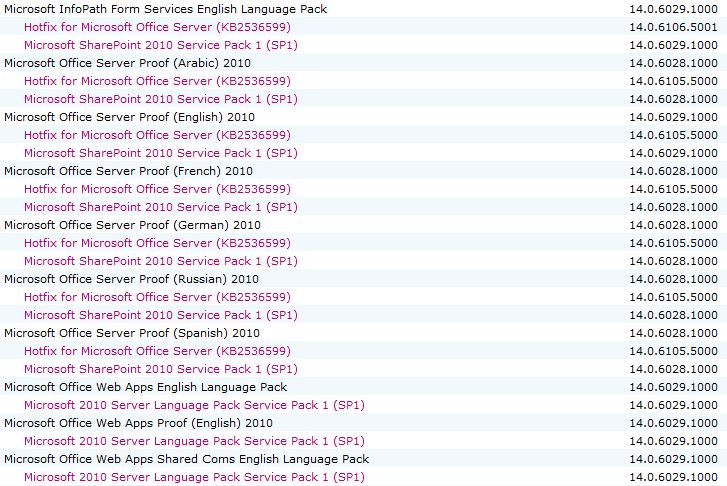 Now, the thing is, even if the production server has a somewhat incorrect package or just its version, I don't know at the moment what it means for me and what future problems it may cause, I don't really want to needlessly change things on my clients production server.

How can I get my own server to be its identical copy where I can backup and restore site collection at my leisure? If it's possible to fix the server's condition without having to reinstall everything how can I do that?

Thank you very much.

I notice the packages you're concerned about all appear to be foreign language packs. In the past when I've created the farm before applying the multi-language Cumulative Update it installed all languages, whereas when I've installed it before creating the farm it only installs languages you currently have installed (in my case en-US).

It's probably not what you want to hear, but if you were to rebuild your test Farm, creating the farm before installing the CU, you may find the packages installed. The version may well still be the 14.0.6029.1000 Version however.

As the link you included suggests, it would appear your Production server has been installed with the faulty SP1 slipstream. If your test server was built with the corrected install, or manually patched to SP1, you may be out of luck.

In the end I managed to get my standalone server to work properly. After upgrading it acording to the package versions of the production server in the end I also needed to launch the configuration wizard as well, which I wasn't doing at first, apparently it's needed.

Not the answer you're looking for? Browse other questions tagged sharepoint-enterprise upgrade backup restore cumulative-update or ask your own question.