my question is that does microsoft provide persian calenadr in sharepoint 2013 beta? as u know in .net 2.0 and above, microsoft has add support for persian canlendar with this class System.Globalization.PersianCalendar, and also add persian collation in sql server 2008, also some office addon's packages published to support persian languages in office 2003, 2007. but do not have offical support for persian calendar in sharepoint 2007 and 2010. i hope this problem solve in 2013. Honestly i request to managers to help me to accomplish this goal. thanks in advance.

This is the list of calendars in the current Preview: 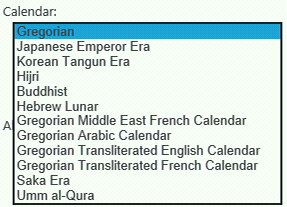 I would expect you being able to use the persion calander maybe outof the box but if not then you might have to do some tinkering slightly to get it in persian! I did find a 2007 and 2010 but its a third party who created it but looks good and expect them to do a 2013.

As you may know nothing is 100% in the beta version of 2013 and anything could change, be removed or added in... I would preseume that it might have an out of the box feature as sharepoint is vastly improving with every version and its getting easier also to change with each version so I would expect if you dont have the feature to change the date then it shouldnt be hard to do it yourself :) btw the calenders i presume your looking for is called Hijri Shamsi, or Jalali Calendar, or Persian Calendar which I belive microsoft are working on it but I dont know if its going to be released on the full version! as i noted above and you have that they have it in .net 4.5 but not incorparated it into sharepoint yet!

Not the answer you're looking for? Browse other questions tagged sharepoint-foundation calendar 2013 or ask your own question.