How does the SharePoint My Site display language feature work from a technical standpoint?

I'm searching for a documentation of how SharePoint processes the display languages that users can configure in their My Site. Which components (services, timer jobs, caches...) of SharePoint are involved and how do they interact when changing this setting? How does a site "know" about the user's preferred language?

Here is a screenshot of the setting (sorry in German, because this darn feature does not work): 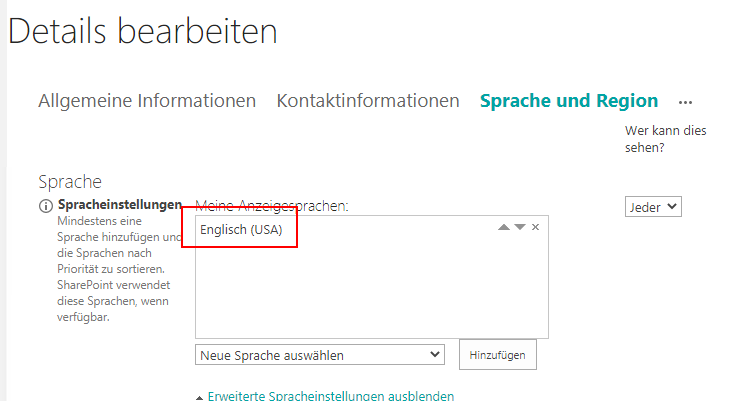 Currently I'm debugging a case where the language setting simply is not applied regardless of what the user configures. Language packs are installed, alternative site languages are enabled, we waited hours after changing the setting. No UI language change. So I want to understand the underlying mechanisms to know where to start looking.

My specific case is a SP 2013 on-prem environment but I assume the underlying architecture did not change much in SPO (at least for the classic experience) given that the classic My Site UI is still there. (It just got more complicated.)

Can anybody provide information or pointers to documentation/books where the architecture of this specific "display language" functionality is described? Or at least provide some insights as to why it might take an hour to apply this setting after making changes?

There are two timer jobs involved. One synchronizes the language setting with Active Directory, or with a non-default user profile service in some cases. That synchronization is typically not an issue.

The other is the one that controls what sites know, the "User Profile service application - User Profile to SharePoint language and region synchronization" timer job. This goes to every site and updates the user-specific language setting on that site. The timer job is typically once per minute but it sometimes doesn't get to it in time so it can take several minutes.

To see the current setting for the current user on that site, go to "_layouts/15/regionalsetng.aspx?Type=User"

In addition to that, SharePoint Online and SharePoint 2019 cache some menus and navigation so the language change can take a while, but you should be seeing a fair bit of the other languages right after the sync is done.

About the language settings in SharePoint, you could refer to this article:

For it may take an hour to apply this setting after making changes, i think there should be a timer job running hourly to sync the language.

Not the answer you're looking for? Browse other questions tagged 2013 sharepoint-server 2016 2019 mysite or ask your own question.

0
Change site display language according to the user
5
How does SharePoint search work across site collections
1
The site does not contain a default keywords termstore?
1
How does CALs work for SharePoint 2016?
1
Remote Event Receiver does not work after Polish language pack installed
6
How to remove SharePoint Feature from Database
0
SharePoint permissions: Restrict users from deleting site elements