Save & Cancel buttons has disappeared from SharePoint list Form

Not everyone in the Company has Power Apps, so the idea was to edit the list from the App and directly in the list by pressing New button which opens a form. At first the Form had a Save button at the bottom. But now this has disappeared. There is a save and cancel button a the top of the form, but when trying to save from there a popup appears "Skip to main Content", when pressed nothing happens.

I have also moved the columns around and renamed them in SharePoint, then updated the app also. Could this have caused the problem?.

I have other lists in the same workspace and this hasn't caused any problems there.

thanking you in advance 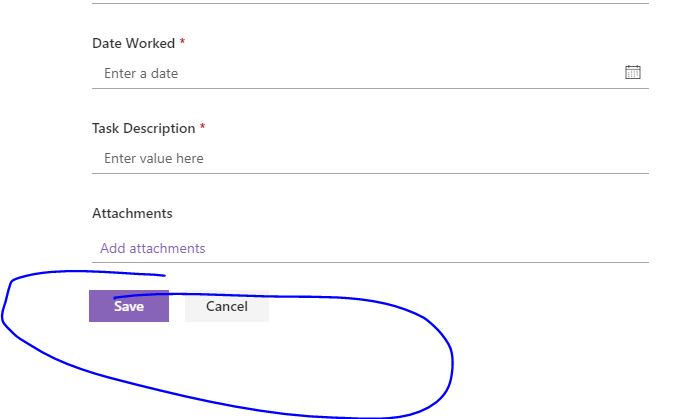 Please go to the PowerApps to check the OnSubmit and OnCanael function of the app as shown below:

If it does not work, you could refer to below article to add new Save and Cancel buttom to submit the form:

Not the answer you're looking for? Browse other questions tagged sharepoint-online list-form or ask your own question.

1
Item Edit Form: Delete Item on “Cancel”
0
Validate my newform.aspx “Save” and “Cancel” buttons
1
InfoPath 2010 form into Sharepoint Online - iPad
2
Sharepoint Online new form move bottom save button location and change text to submit
1
Save as draft functionality on SharePoint online list form
1
SharePoint List form customized with Power Apps displays very little in size although the Preview screen displays perfectly
0
PowerApps gallery to form, how do i disable SAVE button when Form is in view mode?
0
How to remove default Save and Cancel button on Customized SharePoint form through PowerApps