Unable to build and reuse our term hierarchy, error “Terms can not be shared multiple times in the same term set”

Now i want to create our term store to represent the above hierarchy, so for example when users upload a document inside "IT >> General Document >> Outlook" folder, to select the term as follow, as so on..:- 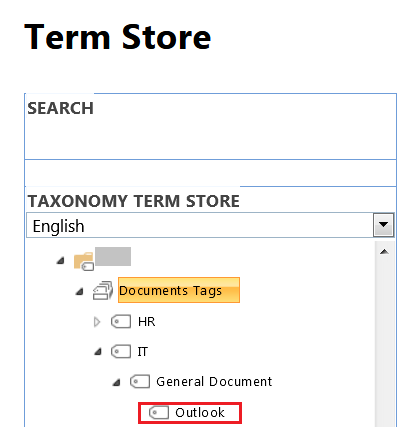 But i face the following issue, is that i am unable to reuse the shared terms more than once inside the same term set. For example i created a term set which represent the shared terms (i name it Template), as follow:- 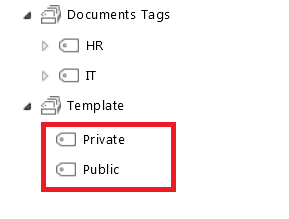 But i am unable to reuse the Template's terms more than once, for example as shown in the above picture, if i want to reuse the terms named "Private" and "Public" under the "IT" and "HR" terms, I will get this error:-

Use two different fields, one scoped for your IT/HR term set, the other field scoped to your Template term set.

Not the answer you're looking for? Browse other questions tagged document-library term-store term-set term reuse-term or ask your own question.

2
Document Library View filter on term
1
What is the right KQL syntax to query for all documents with property in managed metadata term hierarchy?
2
How do I programmatically get sub terms in a reused term?
0
Managed navigation with pinned terms
1
Unable to create a Term Set using powershell. Error:- “Cannot convert argument ”lcid“, with value…Input string was not in a correct format.”
1
Unable to copy/paste a file between 2 document libraries using c#. Error “The URL is invalid.”
0
Show folders in document library after a file inside is shared