Last year I moved a client (15 employees) away from a sloppy Linux/Samba file server to SharePoint Online. Although it did not go smooth the migration went along reasonably of as client expected a bumpy road ahead anyway.

That said, something very sneaky occured at one point when a laptop was configured for SharePoint. We did not noticed first as vacation were in sight. During the summer though, some people noticed something strange in their migrated folders which goes pretty much by the name of their respective program: Teens-programs, Family, Seniors and so on. The subfolders goes about between roughly 3 to 6 levels. Back to the weird problem. A single laptop is configured in early summer to work with SharePoint and then something happened. Some folders are duplicated and the name of the laptop is added on to the name of the duplicate folder. And then I noticed it is not only duplicated but in fact and more often split apart. 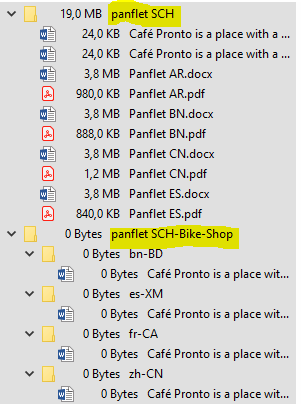 So a given folder is named say "Archive" then right beside I see "Archive-Bike-Shop". "Bike-Shop" is the name of the laptop. At first I think that only some folders are affected and it is only duplicates. But digging in the folders I find not only that the folders have been split appart but other subfolders have the name "Bike-Shop" added along with their peer folders. "2018" have a duplicated folder "2018-Bike-Shop". The duplicate folders contains part or some of the same files as the peer folder. The more I investigate the matter the more I find that the glitch becomes a rather nightmare... I found throughout the folders more than 1500 occurences "Bike-Shop" all over the shares affecting all folders at every subfolders level...

Office 365 support was of no help. They said that if I contacted them in the week it did happen they could have fixed it but now it was too late. So beside going in each and every folders to merge duplicated/splitted folders how can I do that in the most effective way. There is little, it seems, I can do in SharePoint Online but since the content can be partly or completely synchronized on a computer there may be some magical script/batch job I could run to merge and get rid of the duplicated folder. On the side note: thank god, only folders are affected not files.

Browse other questions tagged sharepoint-online duplicate subfolders hostname or ask your own question.