Stop SPFieldMultiLineText from updating when not changed

I have a list with the requirement to keep a history of a frequently updated multi-line status. Additional requirements are to not show history on New and Edit forms and Views, but to show the history on the Display form. Additionally, the DataSheet view must be able update the field.

I pieces of the implementation are :

This works OK, although there are occasionally duplicate or blank entries copied to StatusHistory.

I was moving some other logic into event recievers and thought I would move this as well. This is working as expected, with one problem.

There are other multi-line, auto-appending fields in the list, but they don't insist on updating themselves everytime the item is saved.

Does anyone know why StatusHistory is updating every save (regardless of change); and more importantly, how to stop it from doing so?

After a few more tests:

Status History is updated without change on the version following a version in which it was changed. This image will help make it clear. 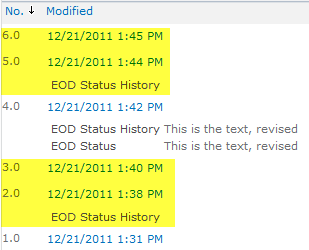 In the highlighted versions, the edit form was opened and saved with no changes made. Version 1 had so many default values set in other fields the two I'm interested in were not visible. I entered 'This is the text' in version 1 and added ', revised' in version 4.

It seems some metadata within the field is not getting set, and it thinks it is still empty after having been updated by the event receiver.

This is the code that is called in both the ItemAdding and ItemUpdating event receivers:

I decided I didn't need to have both the EOD Status and EOD Status History fields showing up in version history, so I used SharePoint Manager to prohibit the history field from being displayed there.

Working theory (as in, unverified but makes sense) to explain the behavior is since the field is not on the new or edit form, the existing value is not populated from the form and is seen as blank by SharePoint's saving mechanism. This results in the save after each change being seen as the contents of the field being removed. Thus the extra save.

As the question has received very few views and no reponses in over a week, I'm accepting this as the answer and moving on.

Is that what you mean?

Not the answer you're looking for? Browse other questions tagged 2010 event-handlers version-history or ask your own question.

1
SPFile is empty the second time the logic is run
14
Detect whether a specific column changed in an SPItemEventReceiver.ItemUpdated event
6
All versions of one item in list
3
Document Library items not updating via UI or code. System metadata (last modified, modified by, etc.) updating
2
SPContext.Current.FormContext.OnSaveHandler Not Firing from Custom Field Type Control
3
Get List Item Version History for each item if specific field was changed
2
Version History (more…)
1
Workflow not updating when republished