Using SP Online with a Custom List of Parts. One of our fields is INSP-NOW which is a Yes/No required choice field and it represents a forced decision -- that is, if a parts vendor is on probation, we set this field to Yes and force an inspection on every shipment received.

My settings on this field are shown below:

When I'm in SP and I change the value (in quick edit mode, or single edit mode) it doesn't seem to update the list automatically. In this image, you can see the edited value is set to NO on the right side, but the record view is still showing Yes... and my PowerApps application is still picking up the Yes as well. 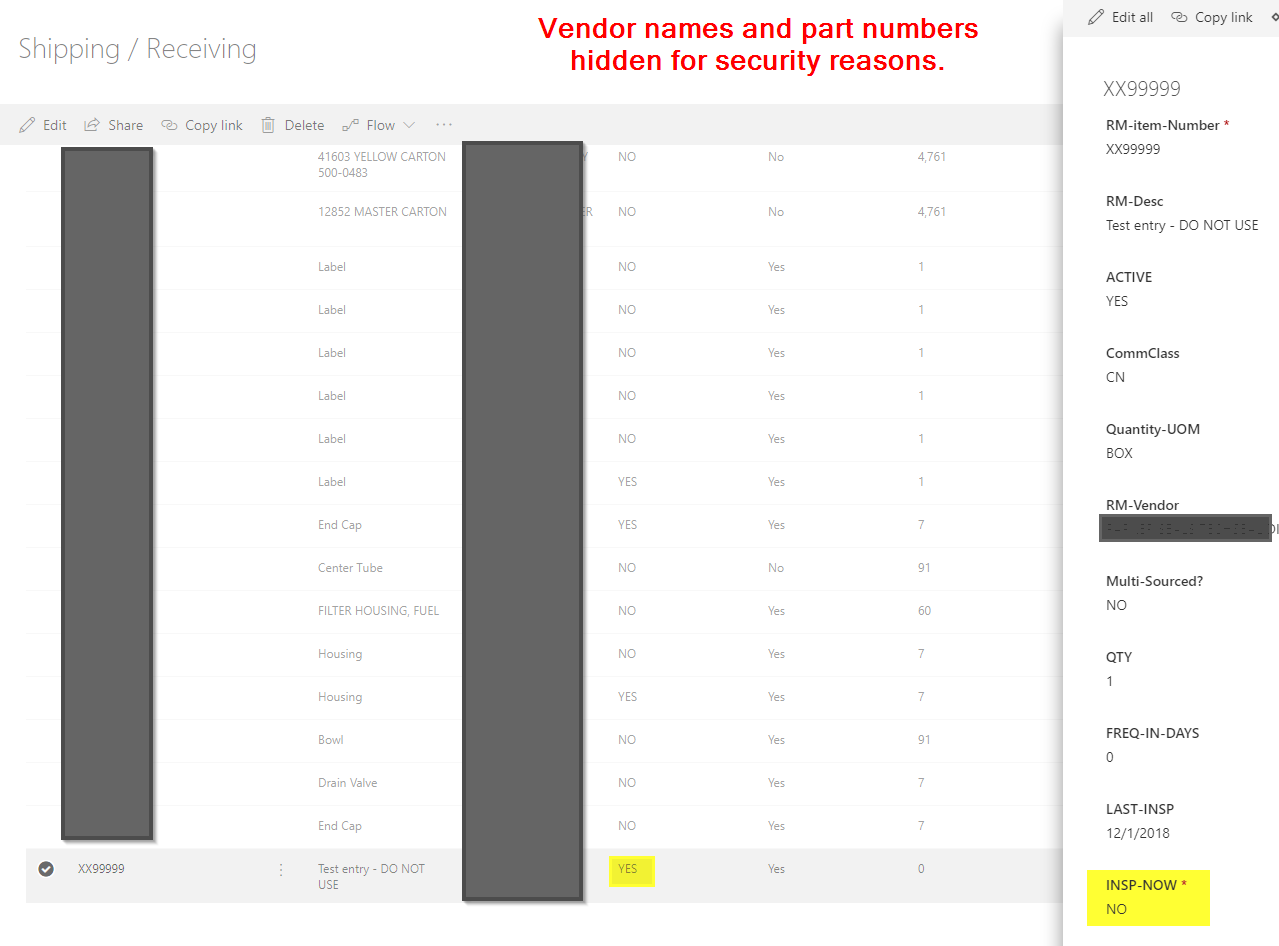 What am I not taking into account here? The record has been edited -- shouldn't the view be refreshing as well?

As a side note, because there aren't many items in the list nor users of this PowerApp, I have the OnVisible control set to refresh on each screen (so that the end-users are always seeing the "freshest" data), but it still doesn't pick up the change on the SP View.

UPDATE 2: I opened a ticket with Microsoft and worked with an Engineer in their Tech Support unit. We tested with various browsers (IE, Edge and Chrome) and at least 2 versions of Windows to verify the issue is consistent. They are working on the issue and I will update when I know more...

UPDATE # 3: Microsoft's Tech Support Engineer has been able to replicate this problem in a sandbox environment. It appears to be an issue with CHOICE fields in the Modern View.

UPDATE # 4: Still waiting for a response from MS Engineers... if you use the details pane to edit the field, it works, but it doesn't consistently work when you use the EDIT menu option.

UPDATE # 5 (final): I finally heard from a MS Engineering Team Leader this morning that this bug fix should be available to SP Online tenants sometime during the third week in February. This is a tentative date. My fingers are crossed. :-)

Bug fix to be implemented for SP Online tenants during the 3rd week of February 2019.

Not the answer you're looking for? Browse other questions tagged custom-list refresh or ask your own question.

0
List Item Description not showing up when viewing item?
1
Custom List Form creation using Powershell - SharePoint 2013
0
Sharepoint 2013: Not able to bulk edit checkbox columns in custom list
0
“The user does not exist or is not unique” when pasting the same name
0
selectively hide webpart on homepage