We have currently updated our SharePoint 2010 Custom application and Now have it running on SharePoint 2013. We have realized that not all of the static content is being updated when we apply the updated wsp that Visual Studio had published.

Example: After installing the wsp against our existing content database, the site comes up fine, but several of the aspx files still contain old SP2010 14.0.0.0 headers instead of the new SP2013 15.0.0.0 headers. To check this, we converted the .wsp to a .cab file and manually verified that the files were indeed updated. This means that for some reason, the PowerShell install/update process is ignoring several files.

What are we missing here?

I am almost certain that what you will need to do to get those files updated is do feature upgrades.

In the comments, you said that all your files are located in "all site content", so whether they are in the Style Library or Site Pages or Site Assets, all those are document libraries in the site, and therefore their content is actually in the content database for the site.

By contrast, things that are in the "layouts" folder exist on the file system of the server, not in any database. Explaining the layouts folder is a little beyond the scope of this question, but the relevant point is that files that are deployed to the layouts folder will always be automatically updated and overwritten when doing Install-SPSolution or Update-SPSolution.

Chris O'Brien has a fantastic series of articles on Feature upgrading, which you should definitely read. But what you will need to do is add to your Feature definition XML with the instructions of what to do during the upgrade, and one of the instructions is ApplyElementManifests, which allows you to tell SharePoint to re-apply the Elements.xml from your Modules, which will essentially re-copy the files into the document libraries.

[Important to note here, as part of the update, you should go into the Modules and add the ReplaceContent="TRUE" attribute to your File element in the Module, which will tell SharePoint that you definitely want to overwrite the files.]

It's kind of a two step process. First, you make your updates to your files in VS, make sure to add the ReplaceContent in the Modules to force the files to get overwritten, and update your Feature definition XML with the upgrade instructions, which might look something like this:

Then package up your updated WSP, and deploy it to your farm using Update-SPSolution (not using the Uninstall Remove Add Install cycle). You are halfway there, because now the Feature definition in the Farm has the updated files. Any new activations of your Feature will get the new files. However, Upgrade-SPSolution does not automatically upgrade any Features that are already activated on a site. So the second step of doing a Feature upgrade is to get a hold of the installed/activated Feature on a site, and call its Update() method.

There are a couple ways to get to the installed/activated Features to update, I usually write a Powershell script for each of my solutions that has all the Feature IDs of the Features in that particular solution hard coded into the script. Those look something like this:

Running that script and calling the Upgrade() method on the installed Feature will trigger the UpgradeActions you have defined in the Feature definition XML, and re-apply the Elements.xml from your Module, and thus re-deploy the updated files to the document libraries.

Where you can add the upgrade action instructions to the feature is, and you were almost there, if you go to your feature interface, click on the "Manifest" tab to get to the manifest XML preview, and then at the bottom of the screen you will see "Edit options" with a plus sign next to it. Click on the plus to expand that section, and it will give you an editor window where you can add the upgrade actions XML, which will be merged with the other XML that's automatically generated by VS when you change things on the "Design" tab: 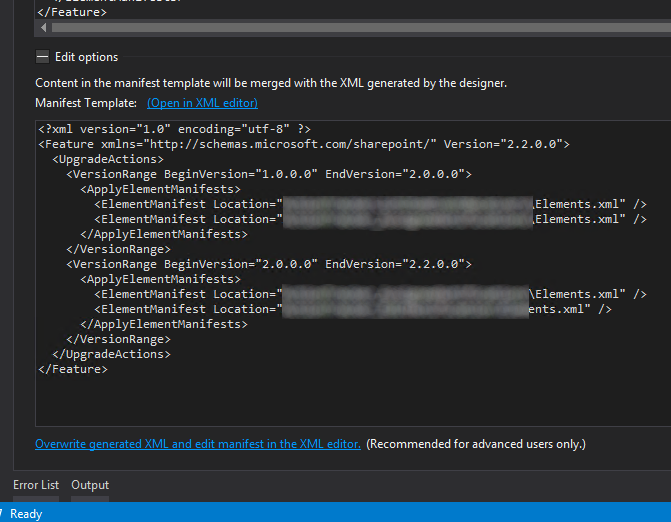 Where you find the feature IDs is in the same place, in the manifest. If you look at the first line of the VS generated manifest, at the Feature element itself, it will show you Version, Title, Description, etc. If you scroll the window right to look further along that line, you will eventually find the ID:

I'm sure there is probably a way to pull that ID from the Farm using Powershell, but I think it's just easier to go into the manifest and copy it. You can't edit text in that window, but you can highlight text and Ctrl-C.

Your situation may be different, and you might need to use different logic to target the Site Collections or Webs where you are looking for your features to upgrade. Maybe you want to loop through everything for completeness? Maybe you know for a fact that your features are only present on one specific Web in the entire Farm, and you want to target that Web only by using Get-SPWeb with that site's URL. There are many ways of going about doing it, and you need to figure out the right way that is appropriate to your situation.

Not the answer you're looking for? Browse other questions tagged sharepoint-enterprise sharepoint-foundation or ask your own question.

1
SPQuery doesn't return all rows
0
Update .spcolor file doesn't reflect on the site - Sharepoint 2013 foundation
0
How to install SharePoint WebPart WSP file with DLLs outside WSP?
1
How to install wsp file in sharepoint2013?
1
Install SharePoint 2013 in home laptop
1
Fail to activate SharePoint.Foundation.Publishing.2013.wsp on my collection site
1
Moving Sharepoint 2013 Install to New Server
0
Update all master pages and default.aspx files of all site collection