Dropdown arrow on navbar not showing

I would provide the location to my site so you can poke around but it is located within a DoD domain, which is not accessible to the public.

It's the weekend and I am not at work, but if I need to provide some pics let me know.

A smaller down arrow than a right arrow is actually out-of-the-box display behavior.

You can increase the size using CSS with something like this:

The .static > is important. That will stop the image resizing from being applied to the secondardy fly out box arrow (right arrow).

But since it is an image, the arrow will lose the crisp edges and look fuzzy on some displays. So I have to circle back to my original suggestion of hiding the default arrow image and then using an icon font or a custom image via CSS.

My first thoughts is that maybe your theme colored the header background to the same color as the arrow, or that the arrow image was recolored by the theme and it matches the header. Basically, maybe the arrow is still there but can't be seen since there are no color variations between arrow and background.

I think the fact that the arrow shows up using another theme further backs up the theory that the arrow image is there, just colored the same as the background.

To see the arrow image in the code, inspect your code and search for ms-navedit-flyoutArrow. That should get you here:

CSS that is being used by this HTML element adds the arrow image as a background to the SPAN.

You can fight the theme and possible recoloring of the arrow from the SharePoint CSS sprite, or you can just add your own custom CSS to hide the default SharePoint arrow and use your own arrow icon. You can use an image file or an icon font such as Font Awesome. If you are interested in the latter just let me know and I can provide a code snippet for you.

The Alternate CSS URL is added via Site Settings->Master Page.

I do not recommend modifying spcommon.png directly.

Here are some screen shots with the results: 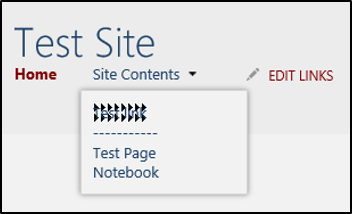 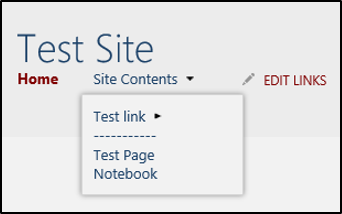 I was able to figure this out on my own and performed a workaround.

I opened my custom.css, the corev15.css, and the oslo-sketch-theme.css in Designer. I went to line #6946, which references .ms-core-listMenu-horizontalBox .dynamic-children.additional-background and found the following in all of them:

I then went back to the original css referenced in the .html:

And found the following:

So I plugged that into my custom.css and now I can see my menu-down arrow. See image below. The only issue now is...the menu-down arrow is smaller than normal. You can see this by the size of the menu-right arrow, which actually uses the same type reference: 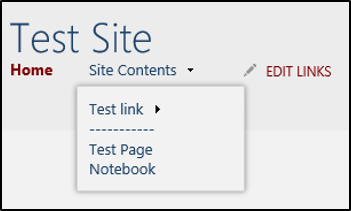 Not the answer you're looking for? Browse other questions tagged dropdown or ask your own question.