I'm using SP 2013 and have a list, within the list is a field called TrainText1 - it provides a step of the training which is being signed off, so the users know what they are signing off against. There are also 'associated' fields, which are Date1 and Tick1, which capture the date the training was completed and a tick to confirm as done.

Here is the field definition: 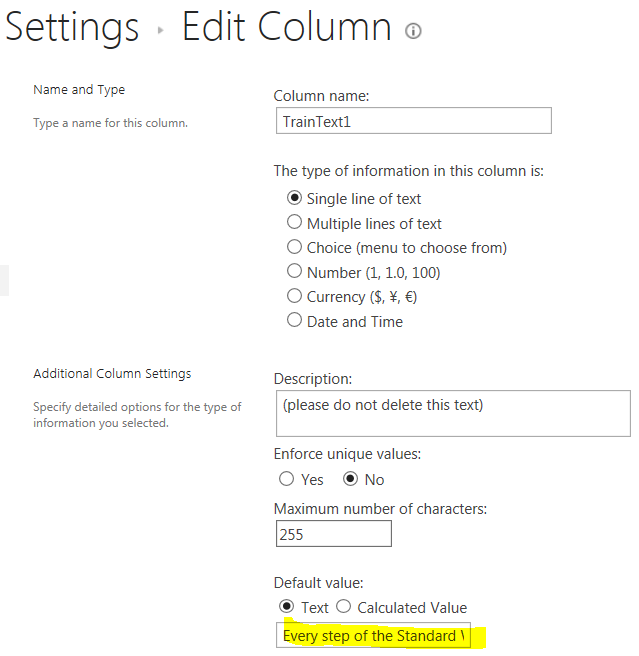 I don't want the field TrainText1 to be edited, it needs to be visible in the form, but set as read only. It's purpose is to describe the training that is being signed off.

I realise editing the html, making a custom form is possible, but I need to avoid doing this for the moment, since requirements (field typed, layout...) are changing quite frequently at this stage. Later on I will create a proper custom form. In the meantime I need to get a working form and capture some data. 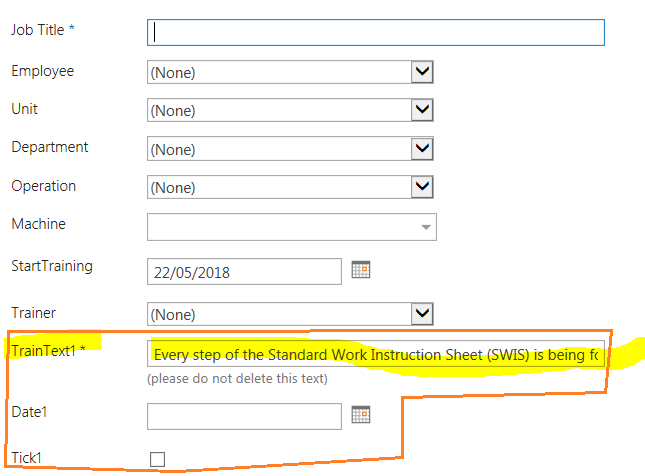 If you want the text to be visible in the new and editform use the JSLink property and render the field as display form.

Here is the code for the js file you can link to:

You can write javascript code and place it in script editor webpart below the form webpart (while editing page in browser).

Get input field id from html-code.

Another perspective would be to remove it from your New and Edit forms. It will still be visible in your display form, but never in your edit/new forms.

You can do that with PowerShell for instance

Not the answer you're looking for? Browse other questions tagged 2013 form default-value read-only or ask your own question.

2
Calculated value for Single line of Text doesn't work
0
How do I make date fields read only
1
How to make a read only field with an incremental number?
0
Make Task Form Field Read-Only using SharePoint Designer
2
How to make a file read only in a folder?
0
Make Column Read-Only in Edit Form
0
Electronic Signature for forms 2013
0
Single line of text - Numerical characters only
1
make a field disabled/read-only in SharePoint 2013 new/edit form