I'm a Farm Admin, not a developer, so this may seem like a very basic problem, but I don't know where to start.

I have inherited a SharePoint 2010 farm. It makes extensive use of custom web parts that were developed in Visual Studio 2010. I now have to upgrade this farm to SharePoint 2016.

I have created a SharePoint 2016 test environment. I've loaded Visual Studio 2010 to the server, and imported the custom solution. I didn't expect it to work, but I thought I would just try the build and start correcting the errors as they showed up. The first set of errors has me stumped.

The code begins with a set of references. using System; using System.Collections; and so on.

It also includes several using Microsoft.SharePoint... references, and these are blowing up. The error reads - "The type or namespace name 'SharePoint' does not exist in the namespace 'Microsoft' (are you missing an assembly reference?)"

I know this is an incredibly basic problem, but how do I include the SharePoint 2016 references? Must I upgrade to a higher version of Visual Studio?

Thanks for any advice/suggestions.

Addendum - Thanks to the both of you, Derek and Ken, for your responses. Believe me, if there was a developer I could turn this over to, I would do so in a MINUTE. I do not have that option, unfortunately.

I did this successfully a few years ago, when I upgraded the system from SharePoint 2007 to 2010. Then, the web part was created with Visual Studio 2005, and I was able to successfully make the transition to VS 2008. The code required only some minor tweaks. Now I'm going from SP 2010 to 2016, and, taking your advice, have upgraded to Visual Studio 2017. I anticipate much more work than a few minor tweaks.

First, I would recommend upgrading Visual Studio to at least 2015 if you want to develop against SP 2016.

That said, the references can be found in the Solution Explorer section of Visual Studio. 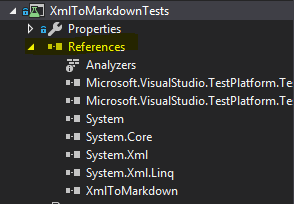 Right Click and you can add references from the system:

Check the box next to the references you need and click OK... The managed code has changed significantly since 2010, so I wouldn't expect this to work without spending many development hours on figuring out how the 2010 objects map to 2016.

I agree with Derek, what you really need is a developer for this sort of requirement.

Not the answer you're looking for? Browse other questions tagged 2010 visual upgrade-sharepoint or ask your own question.