I've added a workflow to the list, running whenever an item is edited. The details of the workflow are not important (or shouldn't be...). However, since I both maintain the list and use it as a member of team A, sometimes I want the workflow to fire (as an end user) and sometimes I don't (when I'm cleaning things up).

In the past I had opened up SPD and simply disabled the worfklow from running on edit, which works. But I live in fear I'll forget to re-enable it when I'm done maintaining and cleaning up. So I'd like to provide a "kill-switch" of sorts that lets me halt a workflow early.

I thought the below picture would work: check to see if "ADMIN" is entered in a certain field. If it is, re-set the field's value to what was previously entered, send me an email notifying me the workflow was overridden (in case someone else accidentally enters "ADMIN," at least I'll know), and then log the override while stopping the workflow. (Non-relevant personal details have been redacted from the screenshot.)

The first time I did this, it worked as intended. I've since done it twice more and both times the rest of the workflow triggered, causing confusion. 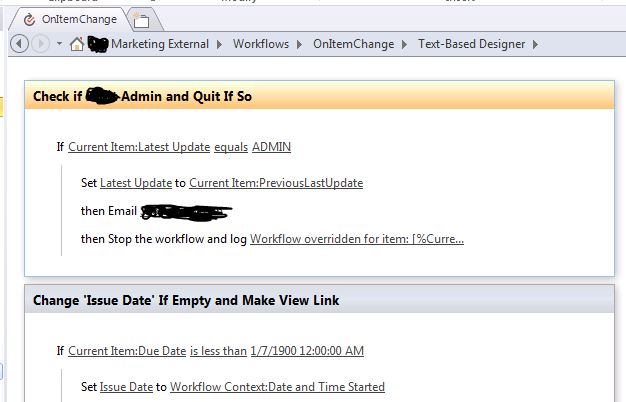 Potentially helpful: The "Latest Update" field referenced in the workflow is a full-HTML field with markup allowed, but each of the three times mentioned in the question I have taken care that the only text submitted was ADMIN with no HTML formatting tags.

In an HTML field, even if you've entered only plain text, it's typically surrounded with <p> or <div> tags. If you look at the list item data from the web service side, you'll see this. Or if you click into the field you'll find a "source" button in the ribbon you can view as well.

You would be better off using a plain text field to look for a string match, or check to see if the field contains (instead of equals) a string, though probably something much more obscure than just admin so another user doesn't accidentally cause the WF to not fire.

Not the answer you're looking for? Browse other questions tagged sharepoint-designer workflow designer-workflow or ask your own question.

4
"The workflow could not update the item..." intermittent error involving Lookup Column in Designer WF
0
SharePoint Designer workflow is looping itself when waiting for a field to change
4
Why is my SPD 2010 workflow running twice?
2
I need to create an SPD2010 Designer workflow that will run when a date range is equal to Today -6
1
SPD 2010 Workflow: Intermittent item creation issue
0
Restart workflow using a field?
1
Update multi choice field using SharePoint Designer Workflow
2
Preventing a workflow from repeating once a field has been filled in?