I have a SharePoint enterprise farm 2013 on-premises. and i have a team site which contain a document library. now for this document i define the following versioning settings:- 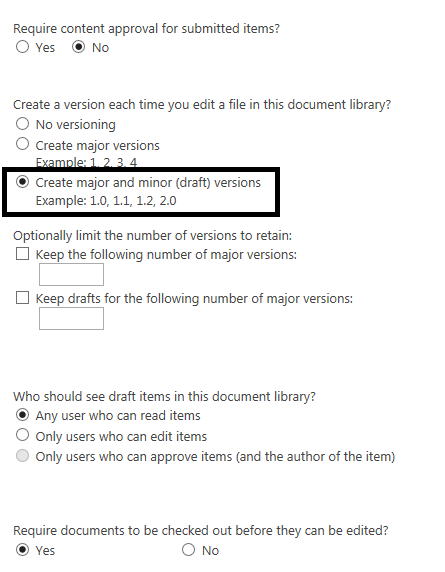 I'd probably set up a calculated column that looks at the Version. Basically this finds the version, finds the decimal point and if the number after the decimal point is a 0, it's published, otherwise, it's a draft. I haven't tested this in SharePoint, but only in Excel and it worked.

EDIT: Ack, it's one of the columns that gets updated afterwards. You may need to set a simple workflow to capture "Draft" or "Published" - See here

Create a new column called "Draft/Published" where the default value is "Draft". Have a workflow that triggers on Item Modified in which the logic looks something like:

Not the answer you're looking for? Browse other questions tagged document-library document versioning check-out check-in or ask your own question.

5
Publish major version for all documents in library
3
How can I get draft documents in a document library to be crawled by search?
3
Is it possible to have published major and minor versions?
2
Document Library-Major and Minor Views
0
Sharepoint 2013 Document Library start custom workflow after item is published
0
Document library directly on edit form
2
How to create view, group by or filter on publish status?
1
Is there a CSOM equivalent of SPFile.TakeOffline - Unpublish last Published Major version when there is a Draft version
6
Calculated Column Based on Version Not Updating