Filter/Cascade list elements with a 'yes', 'no' and 'both' possibility

I have this field in my French-Canadian ParentList: 'Gender', with 'Male' and 'Female' as choices.

I have another field in this French-Canadian ParentList: 'Position', which is a look-up field to a ChildList.

Why do I specify 'a French-Canadian' list? Because if I would be lucky enough to be born in a place like France where the position titles are always on the "masculine" flavor whether for women or men, I would not be asking this question now. My problem is, apart the fact my parents thought Quebec as a decent place to have kids, SOME elements in my ChildList are usable only for women, some only for men and some for both. Like this: 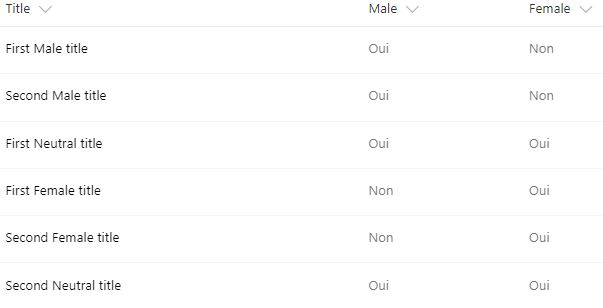 Of course, I want my Look-up drop-down list to show only the right elements, depending on the gender.

What would be the best approach?