When you publish a new provider hosted app using F5 - deployment, the new version of the app will be installed and a new ClientId will be generated. In addition that ClientId will automatically be saved in the Web.Config of the according Web-project.

Now I have a solution that has not only an app-project and a web-project, but also a few console applications that use the same mechanisms and configurarions and so also have a ClientId stored in their app.config.

Currently I have to manually copy the updated ClientId from the Web.Config to each App.Config of the console applications.

To avoid this I would like to use a fix ClientId (instead of a new one every time I redeploy the app). As an alternative, if the Clientid also is stored in the App.Configs automatically I would be happy, too.

I did not find where the ClientId-Web.Config-replacement takes place. If I could find that and could change it to also modify the other app.Configs that would be an alternative. But there seems to be nothing in the csproj-files.

I want to share my experience here and seems you mixed different approaches.

F5 used to develop a add-in so it's easy for us to dev/debug a add-in in developer site, VS will do many works for us(uninstall/install etc.).

If a add-in ready to development to 'prod', we should package a add-in and deploy to app catalog.

If you want to use fixed add-in ClientID, you could create it in /_layouts/15/AppRegNew.aspx, when you package your add-in, you could use the ClientID for your add-in. 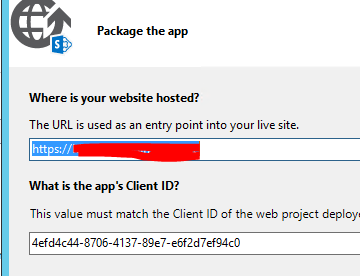 If you create a add-in in a developer site with fixed ClientID, when you deploy the add-in to a different site app catalog and use it in a site, the add-in will use the fixed ClientID also.

Answering my own question I was able to copy the clientId and Secret which are automatically dynamically created and stored in the Web.Config to my console applications / Timerjobs:

Not the answer you're looking for? Browse other questions tagged development csom visual-studio provider-hosted-app or ask your own question.