Can I send an email to a distribution list via workflow?

I have a workflow set up to send an email to a set group of people once an item in a list is created.

There are ~40 people in the distribution list. I want to use a distribution list so I don't have to manually add/remove individuals from the email in the event that someone leaves/joins the company.

Throughout testing I configured the workflow to only send the email to me to reduce noise. Now that we're trying to push out the list to the entire organization, we've began testing it with the distribution list we plan to use in production.

Also worth noting - The distribution list turns into a strange string of characters after being added. See below:

That character string is indicative of SPOnline relating to an existing Active Directory group.

Revisiting something today in an old workflow I set up a while ago, I figured out how to send emails to a distribution list. Based on the example image, the "PO Type" field will determine what email addresses are added to the email that is being sent out once a list item has been created. If PO type equals "All" then set variable [variable name, as a string] to [email address of DL]. Go to the email you want to send and add "Workflow lookup for a user..." and set the data source to "Workflow Variables and Parameters", and the field from source should be the variable you created. Add every possible variable to the email recipients, and the conditional statement will determine what variables are set. If the variable is not set, no email address is added. 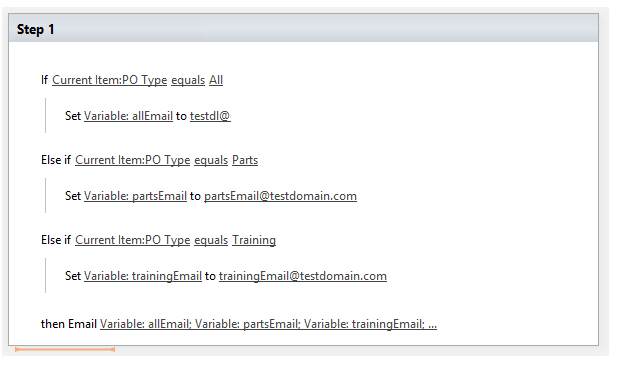 Not the answer you're looking for? Browse other questions tagged sharepoint-online sharepoint-designer list designer-workflow or ask your own question.

4
How to add values from a “Person or Group” list column type to workflow email To or CC field
0
How to have a list auto update once a week and then email the people in the list?
1
How to email group/distrubtion instead of a wall of individuals when using a workflow?
0
Adding item to SharePoint list programatically not triggering workflow or populating people control correctly
1
Issue sending workflow email, to an email enabled AD security group
2
Emailing names in a contacts list using Designer
1
Send Email with Options step failing in Flow