SharePoint 2010 Designer workflow fails to resume after a pause - Help convincing IT its a server issue?

For some context, I've only been using SharePoint for a few months and have no access to the server, as I'm actually just a tech minded HR person. So any help is greatly appreciated, even if it might seem basic as everything I know has come from google-fu.

So, we have a custom approval workflow that I made with SharePoint Designer 2010. Intermittently, we will have issues with the workflow freezing without any errors. We only notice there is a problem when one of the approves takes a longer than normal time to vote, and when we follow up, they say they voted a while ago. If they try to vote again, they get "This task is currently locked by a running workflow and cannot be edited". I have spent days googling, and have come up with a number of ideas, but since I don't have access to the server, I have to go through our company's help desk. Their official stance is that they don't support custom workflows, as debugging them can take forever, but will help if they can.

While I'm still open to the idea that the workflow itself is the problem, I believe its actually an issue with the server. My theory is that there is something wrong with the timer that resumes paused workflows as I found many people with similar issues, but without server access, I can't test them. My approval workflow doesn't contain any pauses, but I think occasionally, it is getting paused externally, due to server load, and then fails to resume.

To try to get IT to look into the server, I made a

that starts, pauses for 5 minutes, then sends me an email, and enters a log after each step. However, instead of taking 5 minutes, it takes a variable amount of days. Something I noticed is that when multiple instances of this workflow are started, even on different days, they will all finish at the exact same moment as observed 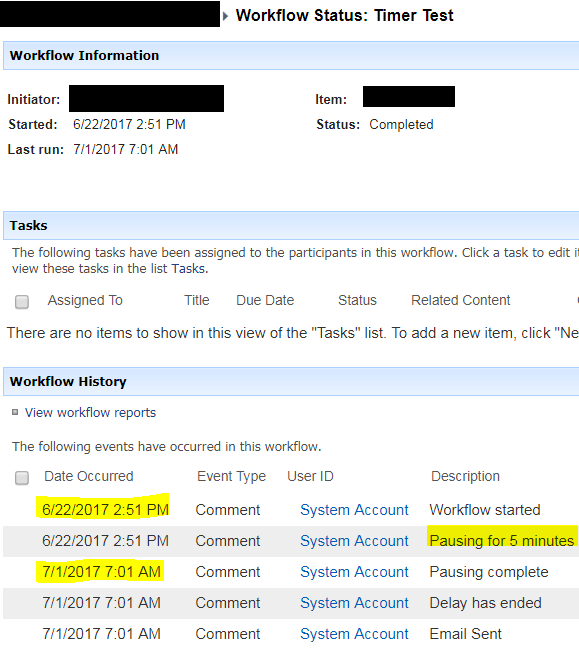 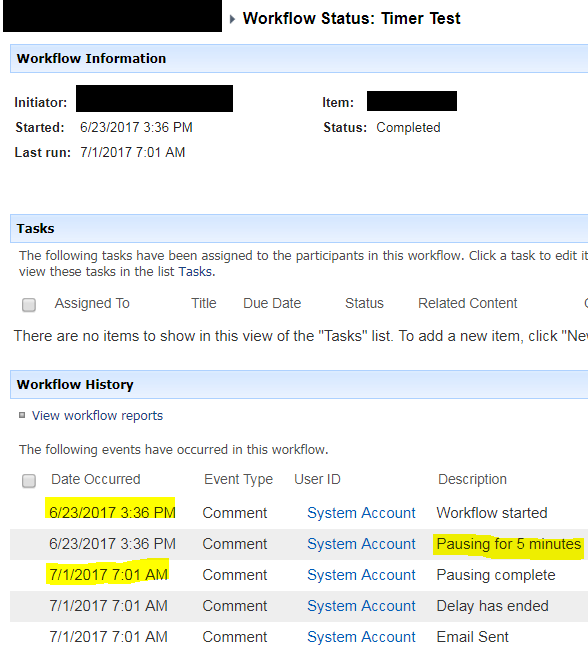 I feel like this is meaningful, but again I believe I'm stuck without access to the server logs. I've gotten a hold of an IT person who seems to be a little more willing to help, but won't go on a wild goose chase. Are there any SharePoint Masters out there who can guide me on how to convince IT to look at the server and where they should look (assuming it really isn't my fault) to find the problem?

I guess I'm hoping to win the lottery and someone will know exactly what is wrong. Thank you for any help that can be provided!

Browse other questions tagged 2010 designer-workflow pause or ask your own question.