Unblock your team by capturing collective knowledge that anyone can find.

“If there is one thing developers like less than writing documentation, it’s responding to unnecessary escalations […] and too many escalations wear down the developers.”

“We needed a better place to store all the questions and answers that people were repeatedly asking, and we discovered Stack Overflow for Teams.”

“We use Stack Overflow for Teams internally when onboarding new developers, and when new developers ask questions, everyone can benefit from the shared knowledge.”

Now I can show the title and body of the of list item using:

But I can't get the "Message Type" property

I'm not sure if this is a javascript or SharePoint question but have added it on this site as I think it's the Sharepoint syntax that is causing me problems.

I'm trying to follow a tutorial, linked below, that allows me to change the appearance of the Announcements list on the home page. My trouble is that the values returned in the function are all undefined.

I have tried many options including ensuring the fields are readable in the list view and trying to debug the code but to no avail.

Here is a screen shot of my announcement list setting view. 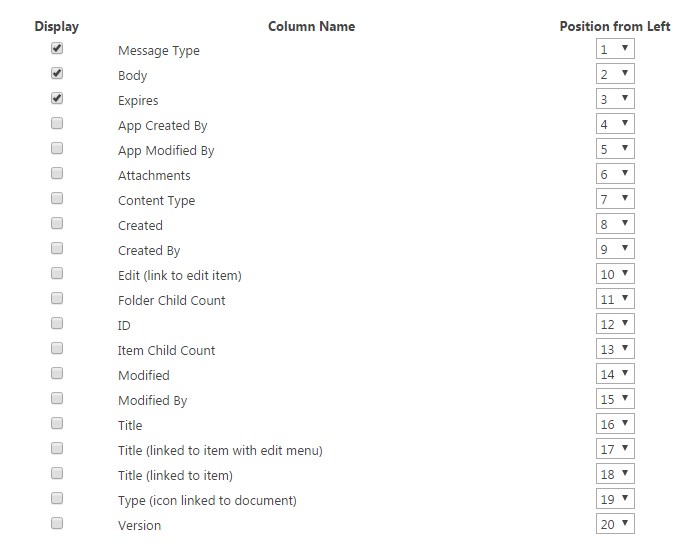 Here is the code in my homepage_message_override.js that I am testing with; (Edited)

This all outputs the following;

The tutorial you linked to instructs you to add a column to your announcements list called "Message Type".

What you have to be aware of is that in the CSR code, you need to be referencing the internal name of the column, and you also need to be aware of some of the idiosyncrasies of how SharePoint names columns when you add them from the UI.

If you notice in the tutorial, their code references:

Notice how there is no space in the field name - no space between the word "Message" and the word "Type".

This shows that they added the column to the announcements list using a best practice technique of using no spaces when initially naming columns.

This is why it's a best practice to create columns initially with no spaces in the name - the resulting internal name will not have the extra characters from the encoded space.

So in this case, the people who wrote the tutorial probably added the column to the list, and when they initially created it, they named it "MessageType" (no space). Then after creating it, they went back and edited the name of the column to be "Message Type" (with a space). This results in the column having a nice display name with a space, but with an internal name of MessageType.

So, in your case, if you did not know about that and created the column initially with a space in the name, you have to acount for that encoding, and in your CSR code you have to use this:

If you ever need to check what the internal name of a column is, you can do that by going into the list settings (or site settings) and clicking on a column name to edit it. When you are on the page where you edit the settings of the column, look at the URL in the address bar of your browser. There will be a query parameter Field= and then the internal name of the column.

Then install the WYSIWYG editor:

Not the answer you're looking for? Browse other questions tagged sharepoint-online javascript or ask your own question.