I have multiple retention stages defined on a SharePoint list. The date field that is being referenced for the calculation has values that range from 1999 to 2017.

The first stage is set to fire at date + 15 years, the second at date + 204 months. They both start the same workflow, creating an item in another list. I manually ran the Info Mgmt policy, then Expiration policy, and the first stage fired fine. I then repeated the IM/Exp policy runs but the second stage did not fire. When I open "Compliance Details" on items that are older than 204 months, it shows the first stage completed, then the second stage has a schedule occurrence date in the past. Does SharePoint somehow ignore scheduled occurrence dates in the past? I'm tearing my hair out trying to figure out why this multi-stage policy isn't working. 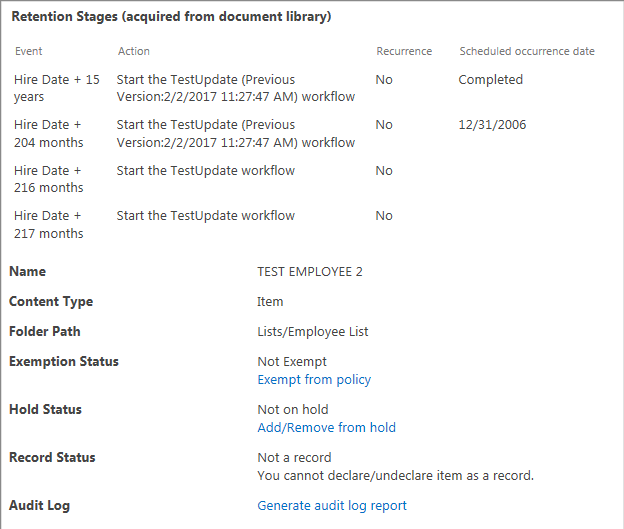 It appears that I found the answer to this. I noticed that the second stage referred to the same previous version of the workflow in the first stage. I changed the second stage to reflect the updated version found in the subsequent stages and all works as designed. The possible root causes would be:

Like most things, I'll roll with this and hope it doesn't break again. If anyone has any insight, I'd appreciate it!

EDIT: ANSWER FOUND When uploading new versions of workflows, SP defaults the older versions to "No New Instances" in Workflow Settings on the list. This is why the older workflow versions would not run. Tested and everything works now.

Not the answer you're looking for? Browse other questions tagged sharepoint-enterprise workflow records-management or ask your own question.