After attempting to publish a template I had recently modified in InfoPath to a Sharepoint 2007 Enterprise site , I was presented with the message:
"The form template has been published to the server but it can only be opened in the InfoPath Filler because it contains features that are not compatible with Web browsers." I receive this error even if I am attempting to publish a nearly empty form to the root of the site.

Reviewing the Warning in the Design Checker shows this:

When I attempt to navigate to the URL of the FormsServices.asmx I am able to reach the service so that message is a little confusing.

To make things worse, it appears that none of the InfoPath forms sitewide are able to be opened in the browser now and all give an error "There has been an error while loading the form" when opened. Before this publish attempt, InfoPath forms on the site worked just fine.

The only misstep I have been able to find was before this initial publish when prompted to save the template, I saved it to (and overwrote) the template.xsn in its published location instead of locally. I made a backup of the file before this and restoring the original template.xsn at that location did not seem to help.

I have tried lots of solutions but nothing so far has resolved this issue and any help is greatly appreciated.

EDIT:
I turned off the option to open forms in the browser to see what happened in that case and while it behaved the same, I was given more detail when trying to open one of the forms: 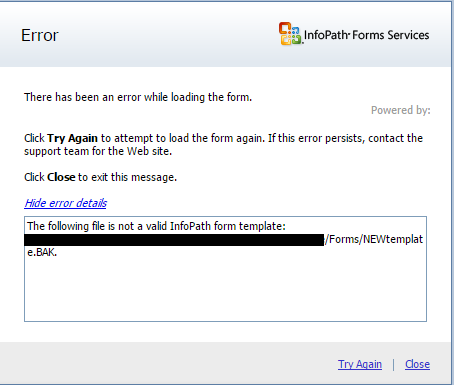 This file was me backing up the template.xsn at the publish location but I have since deleted it and have confirmed that the file does not exist at that path. Where is the mix up and how do I resolve it?

I dug through the event viewer and found an exception "'get_ServerInfo' in type 'Microsoft.Office.InfoPath.Server.SolutionLifetime.XmlFormProxy". That lead me to this MSDN post among others. Apparently it is a known issue that simply having InfoPath 2010 installed on a SharePoint 2007 server will break InfoPath forms on the site. Hopefully someone else can avoid chasing their tail like I did.

Not the answer you're looking for? Browse other questions tagged sharepoint-enterprise 2007 infopath publishing forms-services or ask your own question.