Why does Versioning History show more than

In SharePoint 2013 I selected Keep the following number of major versions to the number 3.

As you can see below my version history has two minor versions and four major versions. 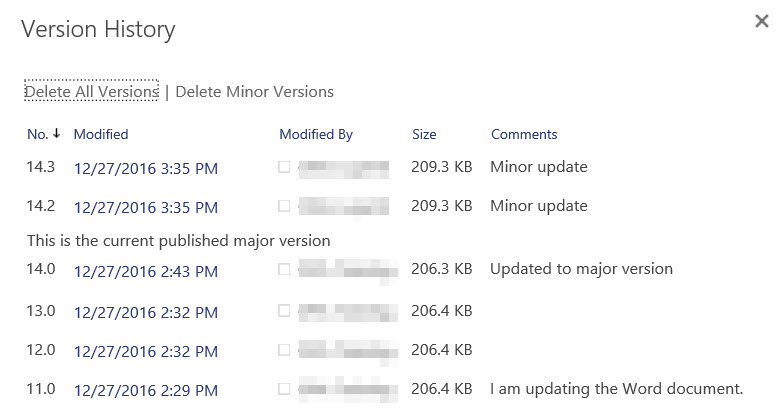 Take a look here: 10 things I learned about versions

Versions do not disappear until you edit the document or manually remove the versions.

If you go from "unlimited" major versions to 10 major versions, the documents in your library will keep their 10+ versions until you edit the documents or their properties. So that old document, “Production planning wk. 21, 2011”, with 56 versions, will keep its versions until you edit the document. But… this document will likely not be edited anymore, so even if you limit versioning, the versions stay there forever. I make it a habit of removing all but 3 versions of these documents manually (in the Version History) whenever I find them. I am also thinking about a workflow to do this for all documents in a library.

UPDATE: Assuming you activated the "Keep the following number of major versions" and set its value to 3 only after documents in document library has been uploaded/edited (creating more than 3 versions), you have to edit the document or manually delete unwanted versions in order to trigger the new configuration and only retain the last 3 versions of any document.

Your understanding is completely right. The first one is not the version but the document itself. Other 3 are the version of this document which you have specified.

Not the answer you're looking for? Browse other questions tagged version-history or ask your own question.

1
Discard an unapproved page checkin in MOSS 2007
1
Stop SPFieldMultiLineText from updating when not changed
6
SP version history is different from version history dispayed in Office application
2
Does disabling version history delete the old versions?
0
How can I tell the difference between Major Version and Minor Version?
2
Deleting more than 300.000 document versions
2
Display more version history for documents
1
Versioning History filter