Sorry, did not know how to formulate the title, might sound a bit strange.
I created a Form + Workflow which goes through some approval stages:

I also created a view UserView to show all the existing tickets to the user [Me] however, I was thinking to create a view which shows:

the tickets only relevant to the Manager | Exec. | Finance

For reference, when raising a Form the cost centre number is entered (there are over 30 cost centers available) and my thoughts were to make the view = show only by CostCentre Nr. but how to make it show only to the next person who needs to approve it ?!

To give a better understanding, I have attached some screenshots; below you see folders Pending | Approved | Rejected and My Requests. Each of the folders is linked to the specific View

Though, them three folders is visible only to the FINANCE Team. Meaning, they can see all tickets from every cost centre whether it is pending rejected or approved.

The My Requests is again a ViewStyle restricted to show [ME] only your own tickets. Which is aimed for the users only who have raised a request. 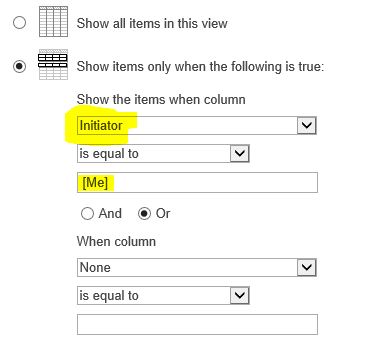 What is the issue here?

With my current approach, the Managers and the Exec's cannot see any of the forms that has been raised or that needs to be approved.

What I want to achieve?

Ideally, I like so that each Manager and Execs can see only the forms (ticket whatever you may be referring to) that they have been assigned to for approval or simply where they are responsible to.

Maybe a way of saying "show items only based on the login" ?!

Current situation: whether a Manager or an Exec's they could see ALL the raised forms across all the department and that is not really ideal.

You can create a new view, and you have Filter option on view settings. By which you can apply the filter on assigned to column or any column that holds the name of the current user on an item. You can make this view public and also have it as a default view for that list from the view settings.

Thanks, ideally you should be using Item level permission and assign permission to each item from workflow based on user Managers/Execs, Also you need to create multiple views like My View, Manager's View, Execs View. This way they will be able to view items related to them on which they have access. Item creator will already have access to item which he created. Your workflow will do the trick to assign permission to item for Manager and Execs.

You can refer below link to on

Note - Enabling item level degrade performance based on how many items you are going to create in this list. so please consider this also before going by this approach.

Not the answer you're looking for? Browse other questions tagged sharepoint-server list-view custom-form or ask your own question.

3
Getting started with Workflows in SharePoint 2010
0
Set approval status of a list item to pending while retaining the approved version
0
SharePoint Moderated View “My-Sub.aspx”: Column header filter not displaying all options
0
approve a request even when the approval email link has been lost
0
CAML Query Where Items are Approved is Ignored
1
Disable 'create view' in a list
0
Sharepoint List View with 50 individual web parts dificult to maintain
0
SharePoint - After changing Item level permissions so that users will only see their items, how do managers/app rovers see everything?