I enter to a Sharepoint site on-premise correctly from Safari browser on an IOS device, but when I close and re-open the browser ask me again credentials without remember them and does not give me the option to save. I tried accessing a Sharepoint Online and ask me. The problem is with on-premise site and probably it is the authentication mode used, NTLM.

Does anyone know any workaround to avoid having to enter credentials every time?

You should setup Web Application Proxy (WA-P) to handle the authentication mechanism as the iOS devices don't have cached credentials capability since they are not domain devices. So when a user hits the SharePoint On-Prem site, they are prompted by WA-P for credentials and then WA-P would securely handle the authentication and then handoff the content rendering to SharePoint server.

It would require some SharePoint admin efforts, but overall it's a very rugged , secure, tried and tested solution to handle BYOD issues.

Web Application Proxy is basically a simplified TMG Server; it’s without a lot of the functionality TMG Server has but on the plus side it gives a real quick way of setting up a reverse-proxy for a web application like SharePoint. There’s no firewall functionality as before outside of what comes with Windows Server by default; the beauty of this role is its simplicity.

Web Application Proxy has two modes of authentication for authenticating against whatever web-app you’re publishing; pass-through and ADFS. The principal is the same though; it’ll act as a safety buffer between your internal SharePoint systems and the outside world as no traffic will reach SharePoint unless it’s been authenticated 1st. 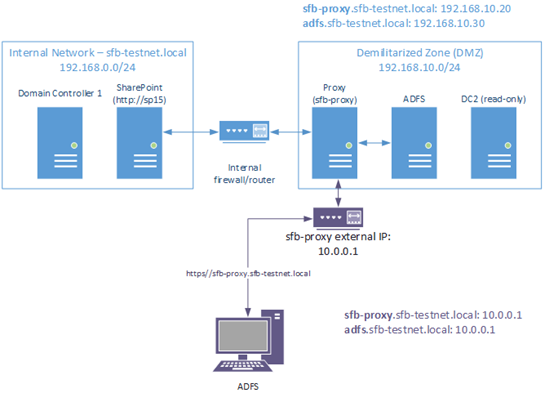 Authenticating to SharePoint from iOS devices

Not the answer you're looking for? Browse other questions tagged 2013 sharepoint-server apple-ios or ask your own question.