How to use managed CSOM to access ListItem version history?

I'm using managed (C#) CSOM to migrate some lists between sites. The problem is, I cannot find way to read and update version history of a ListItem. For example, I have multiline field called Objective discussion. Sharepoint stores many versions of this field with author of change: 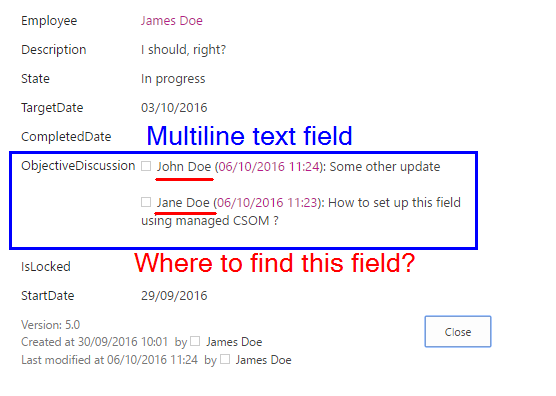 But when I use CSOM I only have access to latest version - and no author!

I am aware that using standard approach this is not possible, as answered here, but maybe some of us have any idea of workaround? For example, I know that ID field cannot be migrated, but StackExchange found a way to deal with it. Any idea/brainstorming appreciated!

So I haven't found any answer to it, except it can't be done via CSOM.

But I have found workaround, and it goes like this: Why I want to use CSOM anyway? My goal was to transfer list content into new SharePoint site, and any other way to copy list, for example using Export/Import-SPWeb didn't include very important lookup field. Lookup field can be imported using CSOM, so my decision was based on that. But CSOM don't support versioning. So the workaround was to do the Export/Import using PowerShell first. This would include multiline field with versions, but missed lookup field. But then, afterwards I'm able to update only lookup field using CSOM, and still preserving versions imported as a first step. This is not the direct answer to question above, but might provide some solutions to people struggling with same problem.

Last advice - if, after importing using PowerShell, your lookup column is broken you will have to delete and create this column again.

Not the answer you're looking for? Browse other questions tagged sharepoint-foundation development csom versioning multiline-text-field or ask your own question.

2
How to get the version history of a list using Client Object Model Sharepoint 2010
1
Use .NET CSOM to copy site lists with lookup columns

3
HTML from Rich Text Field as Plain Text
6
SP version history is different from version history dispayed in Office application
0
Duplicate entries sometimes being appended to a multi-line text field
1
How to get the correspond listItem from the last major version of a file via CSOM
3
Access Old Version File objects with CSOM
2
Remove all versions from a single site/document library in SharePoint 2007
3
Using the OData endpoint to update or insert assignment in Project Server 2013 On Premise
0
How to read ListItem Version Data with CSOM?
0
How to write ListItem Version Data
1
Managed Property for Version History & Comments