Meanwhile I mapping a site collection as explained in this post I hit a very annoying issue: I am not able to map the following address.

The url has the format : \domain.sharepoint.com@SSL\DavWWWRoot\sites\Shared Documents

I am using GPO for policies distributions, like add *.sharepoint.com as IE> Security > intranet 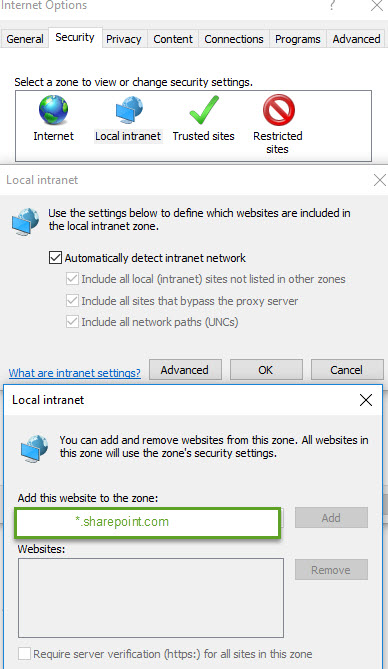 This is the script error

The reason being for this behavior resides in the IE security configuration. I was using Local Intranet when I should use Trusted Site

IE Security Zones are used to determine what a site can do... can it run javascript? can it access the file system? can it store cookies? What you decide for company sites may differ compared to what you want for public internet sites.

What IE does internally ? When is given a URL to load, IE performs the following checks to determine which security zone should be used

Next, IE will attempt to load the page anonymously, if the site accepts anonymous access, no problems, but if the site requires authentication, it asks IE to authenticate. This is one area that zones come into play, and is often why zones get misused.

additionally, the intranet site is generally configured to be less restrictive than trusted sites, since intranet sites are managed and trusted by a company.

Not the answer you're looking for? Browse other questions tagged sharepoint-online powershell site intranet group-policy or ask your own question.