I have windows 7 PC , and I have download SharePoint designer 32-bit from the Microsoft site link. then I download the SP1 for it from this link.

Now I wanted to check the current version for the SharePoint designer,,, but I got these conflict versions :-

so why I am getting conflict versions? and which one is the most accurate ?

It's normal , I also have the same behavior , it's not a conflict. and the most accurate as you said,that mentioned at SharePoint Designer. but in fact, no one accurate than other each one represents specific information as I mentioned below. 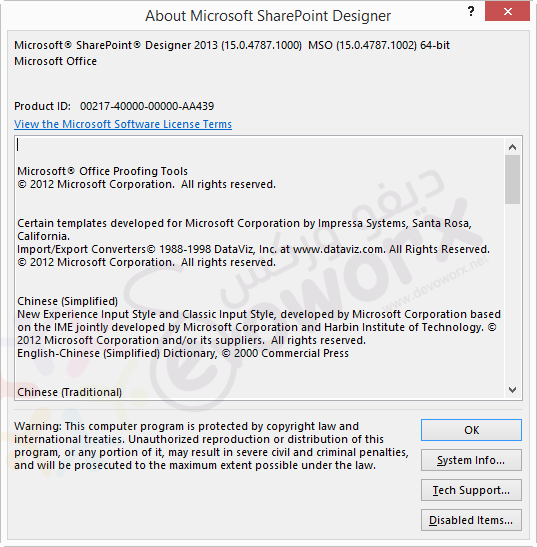 Not the answer you're looking for? Browse other questions tagged sharepoint-designer administration configuration installation farm-admin or ask your own question.

3
Sharepoint Designer and Foundation version mismatch error?
2
What are the current options for a Sharepoint Online trial from Windows XP?
1
what does the following Farm build version relate to (15 0 4641 1000)
3
How can I get Share Point 2010 to install on my Windows 7/8.1 machine?
2
How i can know the updates that have been applied inside SharePoint server 2013
3
unable to install SP1 for my sharepoint designer, error “The expected version of the product was not found on the system”
1
Best approach for un-installing SharePoint Designer 2013 from my windows server 2008 R2
7
error: server side activities have been updated you need to restart sharepoint designer
0
What is the latest version for SharePoint Designer 2013 64-bit inside windows 10