I have come across interesting thing, that in one Document Library in SharePoint 2013, selecting Office Document default is Open and in other Edit

How can I change that default behavior in Document Library? Can't find the option to change it, maybe I'm just missing something.

When opening Infopath document, then it should not be opened in Edit mode.

I have noticed, that Word document in same Library opens first in Read-Only mode and you can choose to edit it.

But Infopath forms still open in Design Mode, not just in Read-Only (where you could fill fields. Maybe this help to understand a little better of my problem.

I came up with a idea, what if I make this list into Read-Only for people, who shouldn't have edit access to there anyway, but then I encountered another interesting problem..

This picture show, when I try to open InfoPath form from list item, when I have only read access (including opening Documetns)

Environment has Office 2016 installed and InfoPath 2013 (could this cause problems?) 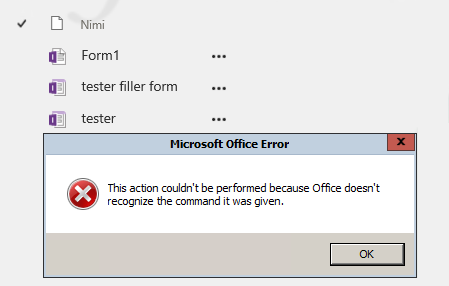 I discovered, that this problem is with IE 11 (version 11.0.9600.18427) and somehow the problem is only with InfoPath documents, if you try open them in Read-Only permissions. It worked with same permissions on Firefox, so I tried to use Compatibility Mode and it worked with Edge mode.

It's not the solution tho, but could help anyone with same problem!

I did it! Problem was that master page had following tag

So this forced this to work with IE 10 mode and following feature was bugged in that mode. So instead I changed that tag to following:

You can change your MasterPage content in SharePoint Designer and changes should affect instantly (you may need to check in).

This is solution to my problem, this might help others. You can test it out, if anything works with different compatibility with F12 tool.

Not the answer you're looking for? Browse other questions tagged 2013 sharepoint-server document-library or ask your own question.