the text just continues on the same line. On IE, the text wraps properly.

I've published this form to a form library that I created on my SharePoint 2010 site, and the form opens and submits as it should (I have it appear in a modal dialog popup window).

I've searched for solutions, and I've been told to add a content editor web part to the page containing the form and apply a CSS file to that to deal with the text wrap settings.

I'm not sure where this content editor web part would go since I directly published the form to a form library on the site, rather than putting it as a form web part on a page in the site.

Is there a way to directly apply CSS to the form itself?

I experienced the same issue, here is my solution:

The InfoPath form is being rendered on page such as: http://ServerName/_layouts/FormServer.aspx. This page locates at C:\Program Files\Common Files\Microsoft Shared\Web Server Extensions\14\TEMPLATE\LAYOUTS\FormServer.aspx. We need to inject the below CSS code in the header section of the page, to force the textarea automatically wrap regardless.

Same code to be added into C:\Program Files\Common Files\Microsoft Shared\Web Server Extensions\14\TEMPLATE\LAYOUTS\PrinLoader.FormServer.aspx, so that the print view behaves the same way. 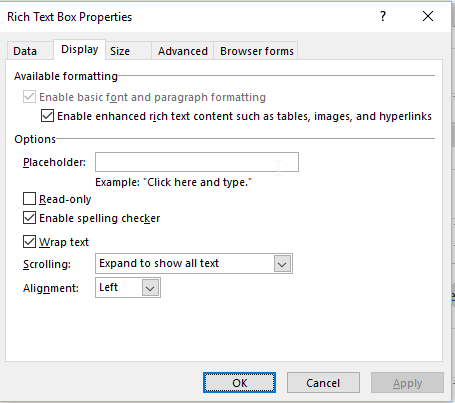 Not the answer you're looking for? Browse other questions tagged infopath css modal-dialog multiline-text-field form-library or ask your own question.

2
Browser based InfoPath form scrolling to top of page randomly
0
Display data of InfoPath form in a page
1
How to Edit InfoPath Form Web Part?
3
Textarea wrapping in Internet Explorer but not in Chrome or Firefox
1
How to align web parts on a page?
1
InfoPath 2010 form into Sharepoint Online - iPad
3
Printing entire contents of InfoPath multi line text field