I have two user lookup fields on my form 'Accepted' and 'Declined'.

I have a workflow, that adds current user to one or another field. But my problem is here, when person has already accepted, but needs to 'Decline' later, then is it possible to check 'Accepted' field for that user and if needed, then remove from there?

So I have 2 fields "Accepted" and "Declined", where I can see people, who have then accepted or declined to invitation to event (event is sent by email).

So I have 2 workflows, what user can activate "Accept" or "Decline". If person has previously accepted, but now needs to decline, then how can I find that person from "Accepted" field and remove from there? 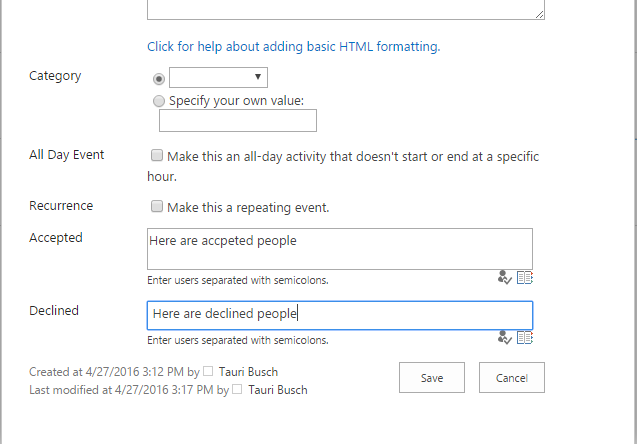 I hope, this explanation is bit more understandable.

This is just a thought process, you might need to check if the solution is feasible or not.

Not the answer you're looking for? Browse other questions tagged workflow or ask your own question.

5
How can I remove a single entry from a multiple People and Groups field via workflow?
0
Assigning a Task to a User From Lookup In Another List
0
Document Approval Workflow - SharePoint Designer 2013
0
Suggestion for a workflow that remembers what it's done
0
remove all permissions from a list item using workflow
0
SharePoint Designer Approval Workflow
2
Removing name from Person/Group(Multiple value) with a designer workflow
1
Approval Workflow for share point
0
Copy item with workflow with person type field, breaks in edit view