How to translate blog tools from English to German? sharepoint 2013

Is there any change to translate the blog tools from English to German or to another language?

I have the following tools; 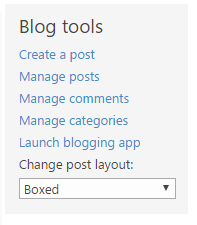 As far I Know, you can get this if you install the extra language pack for German or other languages. You can't just change it for blogs tool even with LPs.

Not the answer you're looking for? Browse other questions tagged sharepoint-enterprise sharepoint-designer sharepoint-online sharepoint-foundation css or ask your own question.