I have installed SharePoint 2010 SP1 on my local developer machine.

I wanted to copy a site collection from one of our productive servers (which hasn't SP1 yet but the December 2010 Cumulative Update) to my dev machine so I could develop locally on it. So I made a backup on the server with stsadm -o backup ....

When I tried to restore it back on my machine with stsadm -o restore ... it brought the following error:

Why is that? I know that I have a different (newer) version locally. But it says "or later" so isn't it suppose to work this way? I could understand it when it was the other way around (restoring backup from a newer version on an older SharePoint) but so it makes no sense.

Shouldn't that be possible or am I doing something wrong?

Are you able to take a backup of the content database that holds the site collection? If you do so you can then restore the SQL Content DB to your dev sql instance and attach it to a development web application, the attach will perform an 'upgrade' on the content db and should take care of your issue.

I had the same issue of actually restoring the Site Collection on a different server that had a patch different than my server. And the DB restore also did not work because my SQL version were different. So, I basically downloaded the SQL Express same version as my other machine and then restored the DB. Then I actually upgraded my test server to the same version as my other machine and was able to successfully able to restore the Content DB and the Site Collection.

Although i would strongly recommend against this workaround that i tried, i was able to restore my backup which had failed this version check.

Open your *.bak file or the backup file in VS2013...It might take a while to open...If you have a good disassembler or one of those good old days tools used by s/w cr**kers, you can use them to edit the file. Ignore all the hex codes. At the start of the file, you can see the file version. Change it to the version of your server, save it and try the stsadm command once again. 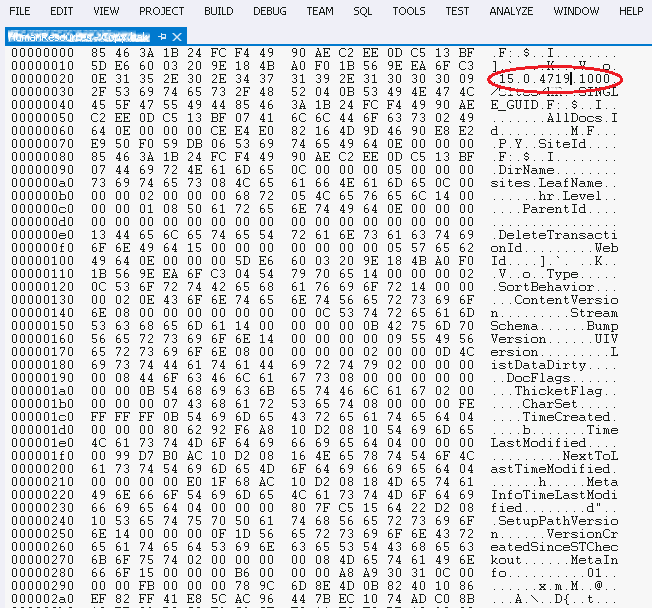 There are few points to be noted for this approach:

A gist of few other fixes can be found here.

Not the answer you're looking for? Browse other questions tagged 2010 stsadm backup restore service-pack or ask your own question.

1
Trying to restore backup for version 14.0.0.7105
0
Restore-SPSite : Your backup is from a different version of Microsoft SharePoint Foundation and cannot be restored