1) Approximately 26000+ sites to be migrated across GEO's

4) Some 600 teamspaces/teamsites also needs to be migrated

With the above details, can you guide me to prepare the physical / logical topology architecture farm design.

Actually this is a quite wide question, where business decisions play a big role in what your goal are. But I guess that you want to keep running SharePoint 2007 until you are absolutely sure that you can migrate from 2007 to 2013 over a weekend off business hours.

Migrating from 2007 to 2013 is done in two steps. First you migrate to 2010 and make sure everything works as expected there. Second you migrate to 2013. It’s easier said than done. There is an option to do an in-place upgrade to 2010, but I strongly recommend not to follow that path. There is no turning back from an in-place upgrade and you risk an inaccessible farm for days and even weeks. So don’t. Instead you upgrade to a new 2010 farm using database attach detach method. Add the customizations and SharePoint services applications and databases as well.

But apart from the process of migrating, you needed to decide what kind of farm you want. A fault-tolerant farm is always at the top of the priority list, but after that there can be several other options to your farm. Assuming your farm is on premise only with no connections to Azure or Office 365 in a hybrid scenario. I’m also assuming you’re not using the farm public available on the internet.

Considering that I don’t know the number of users which is a crucial factor, and not knowing how your geographical sites are configured this will be general. The smallest fault tolerant farm you can use is a farm with six servers. Two Web Front Ends, two Application Servers and two SQL Servers. This could be your baseline starting from scratch if you have less than 10k users. 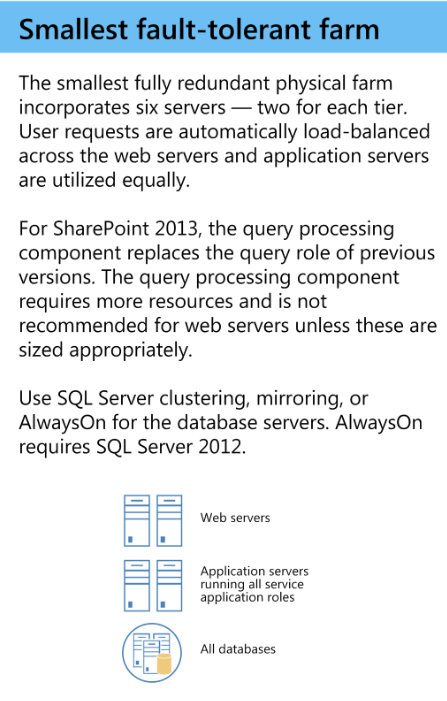 But if you have more than 10k users, and you want to move to another level such as the Mid-Size topology. It contains 6 physical server and 10 virtual servers. 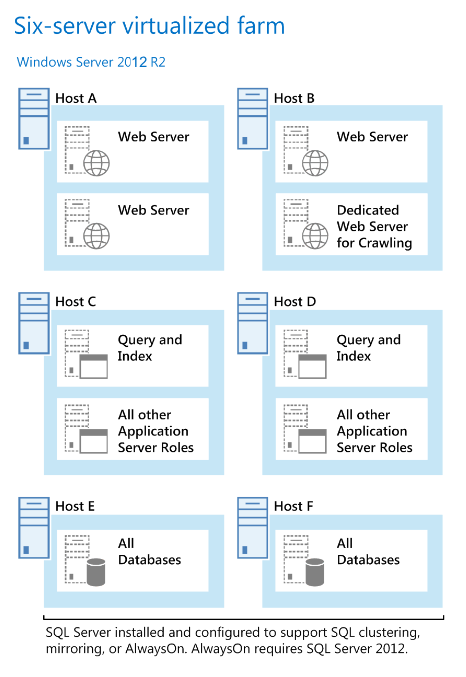 The GEO-locations could make my answer all wrong. But if this is only a single farm approach the above suggestions could give some insights. But if you have a shared services farm topology or multiple farms connected, please update your question and you can get a more specific answer.

Not the answer you're looking for? Browse other questions tagged sharepoint-enterprise sharepoint-server or ask your own question.