I have been given an assignment to create a Responsive Master Page for SharePoint 2013. I've been researching for few days and found out that we can achieve it using:

I am very new to designing so I need input if Responsive Design can be achieved completely using Design Channel panels or if we need to use both to achieve same.

Any reference to blog or read would be helpful.

Note: I need to target IE8 too!

If you want to be in control of what happens, you could use a custom design in your Master Page. In the masterpage you need to set different css-files based on viewport, like this:

Unfortunately the SharePoint:CssRegistration doesn't support the media attribute, why you need to use plain old link to you css-files, but it works just as fine.

Use Device Channels as Alternative

It also possible to use Device Channels to target different group of devecies. SharePoint reads the HTTP_USER_AGENT attribute to determine which device channel to use. Desktop uses the default and blank input of Device Inclusion Rules. Mobile ddevices is easy to target with the fallback of $FALLBACKMOBILEUSERAGENTS;. IPad is also ease to target, just use iPad as value of Device Incusion Rules. But Android Tablet is tough. If you type Android, you target all Android devices; tablets and phones since the HTTP_USER_AGENT of Android is similar to each other. Android phones uses Mobile in its HTTP_USER_AGENT which you need to add before Android targeting tablets. Otherwise you'll get the tablet device channel on Android phones as well.

When you test, you just add ?DeviceChannel=alias to see different views upon development. Be sure to test on real devices before deployment though. 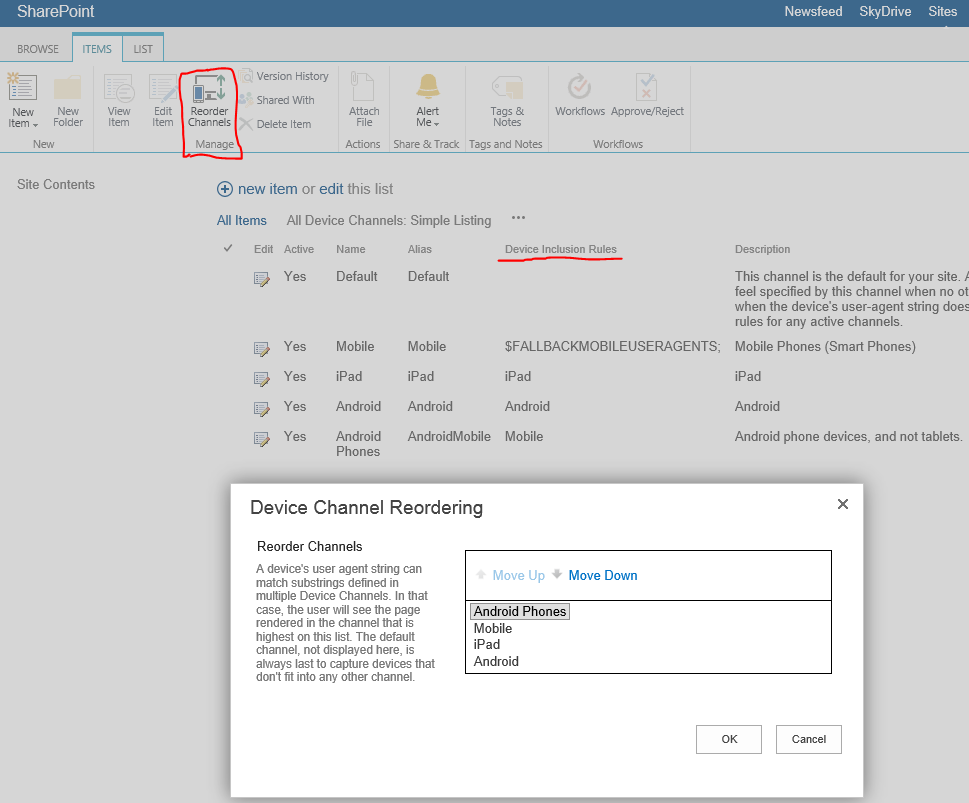 Running Media Queries is easier to control and you don't have to worry that your device channels get everything in the wrong order (which have happened to me a lot of the time). And you don't need to worry about which device users have, the viewport will decide for you.

My personal experience is using Media Queries. In this case we don't need to re-invent anything because of the great solution that is available in CodePlex

You just need to deploy the solution and follow the instructions on the package.

To read about the Advantages & Dis Advantages of Media Queries vs. Device Channel https://spmatt.wordpress.com/2014/04/28/responsive-web-design-v-device-channels-in-sharepoint-2013/

Here's a comparism I did some time ago:

To get more input i also created a question on SO.

Yes I'm talking about Device Channels even when they are not mentioned in the question, because they can deliver the best performance and optimizability for the enduser and the client - in my opinion :)

I'm not sure yet (and it would be awesome to get a lot of feedback to my results), but i tend to use Media Queries. Why ? Well SharePoint has it's own way to handle desktop users and i wouldn't customize that build in functionality if not explicit ordered. On the other hand SharePoint doesn't provide a real UI for smartphones. I don't want to use BootStrap because it contains a lot of styling which will produce problems in branded environments. And I won't use Device Channels because of the downsides.

Not the answer you're looking for? Browse other questions tagged 2013 master-page ie8 device-channel responsive-template or ask your own question.

15
SP2013 & Responsive Design - How to do it right?
6
Create responsive office 365 site - using sharepoint out of the box functionality