I am testing a 2010 list workflow in SharePoint designer 2013. I am assigning serial tasks based on user input from Infopath fields. Through the use of "Start Approval Process"

If the first manager in the series rejects the task, the workflow needs to end. I feel like that should be built in, but it's not, is this changeable?

Edit: I should note that I am testing it, so my user account is the approver/rejector for all steps. I don't know if this is disrupting the process, I feel like an assign task workflow should end the workflow once rejected. I have done some custom editing. I'm not sure if I broke the code somewhere, any thoughts on where that might be?

You should configure your task as pictured below. 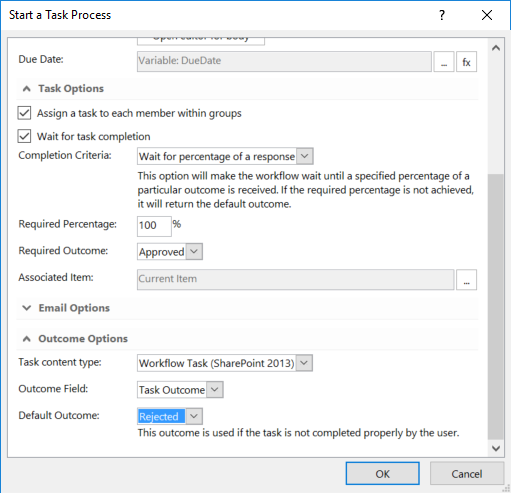 Alright, so finally I have an answer. Let me explain the mistake I had made, so you don't do the same thing.

When you call the action "Start Approval Process", a variable called CancelonRejection is added to the workflow context variables.
This was known.

When you "Change the behavior of a single task" and scroll down to the step "When a Task Completes". This action will be ran every time an individual task is completed. I added "Set Variable: CancelonChange to Yes" right before the if statement for checking "CancelonRejection equals yes" and then it ends the task process.
The train of thought is that now the variable is changed, and will run the if statement. This is incorrect.

After adding an Approval step (so that the variables are added), you must add "Set Variable: CancelonRejection to yes" BEFORE the approval process (move the action up).

Not the answer you're looking for? Browse other questions tagged 2013 workflow designer-workflow or ask your own question.