Which User Profile Service Application Proxy is the active one?

I have two User Profile Service Applications (UPSA) and two proxies. But since SharePoint doesn’t allow two proxies, I have to figure out which of the two proxies is the one that is working and which one creates the error 6398 in the Event Viewer every minute. I need to delete the proxy that shouldn’t be there.

It all started when I migrated the UPSA from a 2010 environment and I also needed a second UPSA (on a different app server) pointing to another Active Directory which doesn’t have ADFS between the production AD and the test AD. I don’t need to synchronize against the production AD, but I want the profiles still in my farm for reference in test. This setup is OK according to Spence Harbar.

I’m currently running a full sync against the test AD. It shows both on my new Manage Profile Service: UPSA page (from the 2013 UPSA) 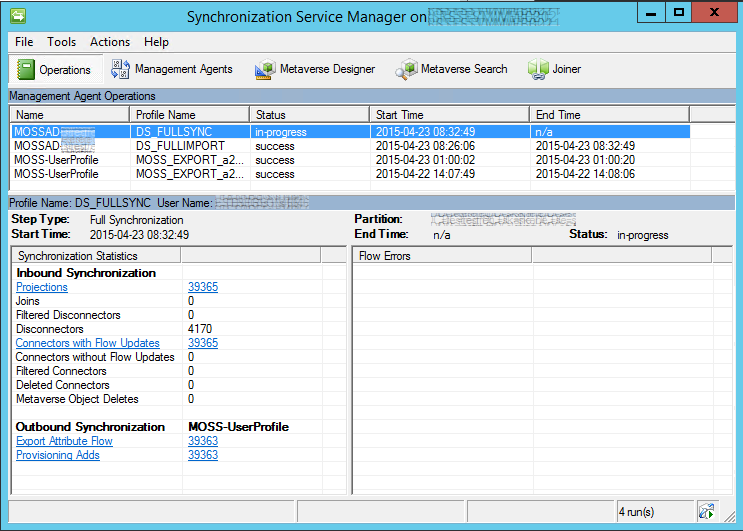 I’ve managed to get the different proxies using these commands:

I also found the property .IsSynchronizationRunning to run on my created instances. I’m guessing, but I’m not sure that it is actually the 2010 proxy that is running (since it’s the one created first) and not the 2013 proxy. Is this true or are there other ways I can check which proxy is running and which is failing?

Couple of things to check:

When you see two UPSA on the Service Application page, what if you click on the each service application and on next page check what is the status of the Sync(on left site column). you will see either idle or running.

Both UPSA having sync on different server(you cant have two sync on one server), you can check the MIISclient on both servers.

Not the answer you're looking for? Browse other questions tagged 2013 user-profile-service-app ups or ask your own question.