We have a custom WCF based service for automating some common tasks within our SharePoint 2007 environment. There is an issue with a piece of code that modifies the title of a SharePoint web. The code is very simple and works fine from a console app:

When the diagnostic logging for the SharePoint farm has the trace log settings set to “verbose”, the call to the web.Update() method throws a NullReferenceException.

Using .NET Reflector, I have tracked this down to the SPUtility.StackTraceString() method, which is only called if the trace logging is set to verbose. This method builds up a call stack string which is then written to the ULS logs. It only succeeds in building some of the string as it seems to expect more method calls in the stack than there actually are. Once it gets to the method exposed as the WCF operation, there are no methods left in the stack and so the null reference exception is thrown.

The stack trace of the error finishes as follows...

The StackTraceString method that throws the exception looks like this: 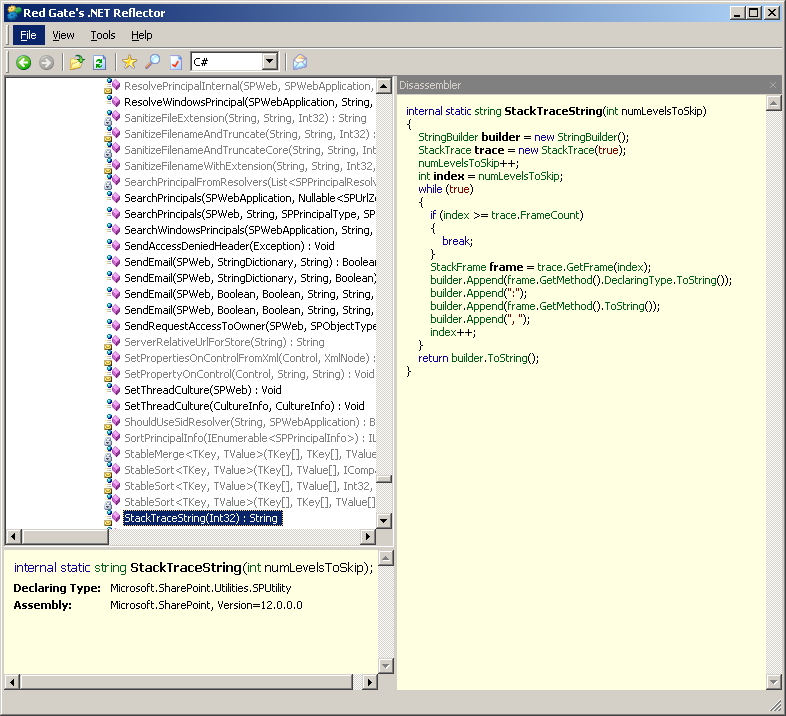 The exception is thrown when trying to access "DeclaringType" after a few iterations (once the WCF boundary has been reached).

The error disappears when trace logging is set to something other than verbose as the code that throws the exception is contained within an "if(verbose){}" style block within the SPWeb.TraceWebOperation() call.

Aside from never setting verbose tracing (as we won't be able to control this in production), is there something else that we can try to get this to work?

Ok, firstly, this is a bug in the implementation of SPUtility.StackTraceString; since StackFrame::GetMethod() CAN return null, but this is not checked.

The solution, therefore is either to ensure that in the instantiation of the StackFrame collection there are no null methods created. Essentially this means that somewhere in the call stack for this thread there has been a method with a null handle. If you can pinpoint that and possibly eliminate it - that would be the best. However, this may have something to do with the fact that it is being called inside a WCF service; which is introducing a stack frame with a null method pointer in it.

Sorry this can't be of more help, but if you could turn verbose logging off programmatically before the call to update, and then reset the state after, that might be the best solution.

Have you tried setting AllowUnsafeUpdates to True at the beginning of your method and then to False after the Update?

Not the answer you're looking for? Browse other questions tagged 2007 wss-3.0 wcf or ask your own question.