All other fields return just fine. I am not wanting to filter on this field, just return it in the data set.

Has anyone run into this before?

Here's one way to fix the problem, though it does require you to change the nature of the Assigned To field and it may not meet your requirements.

Out of the box, the Assigned To field is a multi user field that allows both people and groups to be assigned. With the out of the box configuration, due to some bug or lack of functionality (which looks like it goes clear back to the SP 2007 days), the CQWP will not bubble up the assigned to users or groups.

If you change the field from Multiple and People or Groups to Single and People, the CQWP will pull the data as expected: 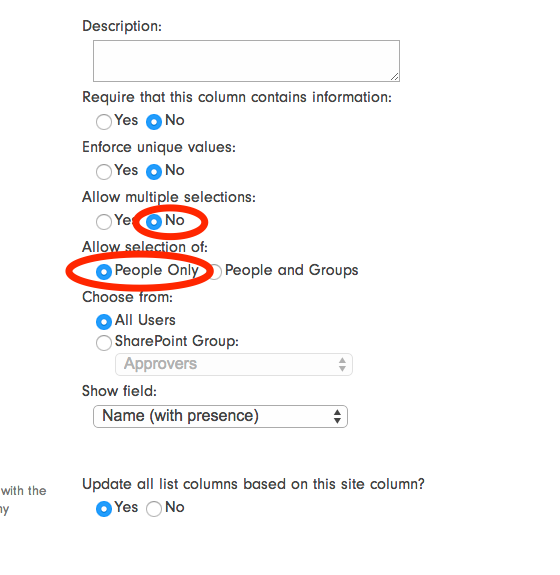 Note that you also have to update the DataViewMappingFields from this:

If you're running in an on-prem environment and have access to deploy farm solutions, you could probably code your way around this problem. If you're in SPO, there's no other way I know of to do it. One thing I had considered was making REST calls to each list in my sub-webs to see if the data could be pulled, but since there was no requirement to store assign multiple users or groups to a tasks, I didn't try it. Would be interested to know if anyone has success with that.

Not the answer you're looking for? Browse other questions tagged 2013 content-query-web-part task-list or ask your own question.