Excel 2013 workbook will not open in client application from SharePoint, only browser

I created a protected, macro enabled, .xlsm workbook on excel 2010 that is meant to be edited by many people. I uploaded it on my company's SharePoint site (Not sure if it is 2010 or 2013, I can't find anything that specifies) so that everyone can access it and check it out and make edits. Some people still have office 2010 and some have been upgraded to 2013 but the people with 2013 have not been able to open the workbook and be able to edit. Every time the 2013 people try to open the file (even when I right click and choose "Open in Microsoft Excel"), it tries to open in the browser anyway and fails because the file is protected and contains vba. It works fine for the people who still have office 2010.

I do not think I will be able to get administrative access (I am an owner of a site tho) so I don't think I can get to the Central Administration site (to my knowledge, anyway). Are there any other settings I need to change? It is very frustrating that it works and opens in Excel 2010 but refuses to in 2013. I have done some extensive research online but have not found anything that works for 2010 and not 2013.

If there are any work-arounds or anything I am forgetting to do I would greatly appreciate it.

Edit: For the record, I am also using 32 bit IE because I have already picked up that it doesn't work for ANYONE on chrome or 64 bit IE.

This does not solve why the SharePoint link does not open the client application, but allows the workbook to be opened, nonetheless.

Open the workbook from Excel, as opposed to opening from the browser by doing the following:

Open Excel > File > Open > SharePoint (Or Other Web Locations) > Browse.
Enter the Url to the library, and open the workbook.

Verify the browser version you are using matches the bit version of Excel.

It sounds like your Office 2010 users had 32 bit office installed, but the pc's you updated are running 64 bit. Test it out and see.

Rather than click on the name of the file, click on the ellipsis menu (...) next to the name and then select Edit. This should open the file directly in the client app. When you click on the name, you are rely on SharePoint to correctly interpret the config settings which don't always seem to do as you expect when you have older versions of Office (or documents created with said versions) which don't use claims based authentication. 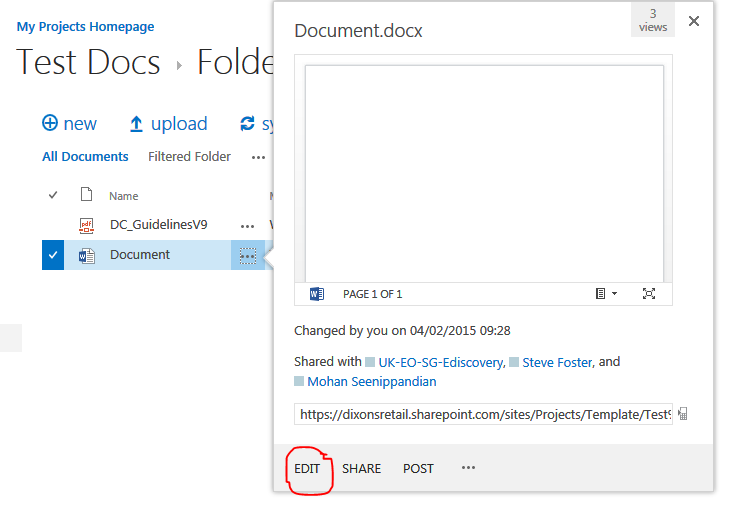 This has been happening to one computer in our company, and no others. Our solution is this: regedit look at SharePoint.OpenDocument.5 (search for it or locate it under HKEY_CLASSES_ROOT) on a computer where it is working correctly you will notice if you rename this key, Sharepoint will only open in ExcelOnline (or WordOnline etc), but if you restore this key to the correct name, it will open in Excel native.

I hope this helps someone else out there that went through this because it was very frustrating.

Good luck out there,

I have this issue in Chrome and it looks that NPAPI plugin which provided this functionality was removed/disabled by Google. My solution was to use "IE Tab" add-on, it opens a site with IE inside Chrome. More details about the issue: http://blogs.technet.com/b/office_integration__sharepoint/archive/2015/04/24/unable-to-open-sharepoint-documents-in-rich-client-from-chrome.aspx

Not the answer you're looking for? Browse other questions tagged sharepoint-online sharepoint-server excel-services or ask your own question.

0
Excel web services cannot open in browser
1
Power Pivot and Power View do not work for Excel workbook with external connection
2
Cant open excel workbooks in browser sharepoint 2010
3
“Open in Visio ” & “Open in Excel” is not working, and I will get an error message
1
Sharepoint 2013 Excel Services not able to pass parameters to spreadsheet
2
Opening Excel sheets from the browser
1
Excel 2010 issue in Sharepoint 2013 - We are sorry we cant open your work book
0
Migrating from Sharepoint 2013/excel services to Office 365