I have two lists setup:

Office: only has title field
LOB Manager: has responsible person and a lookup column to the Office list.

The office lookup in LOB Manager is configured to use the Title field in the office list.

This is a deal breaker for us to not have the sub list drop downs filtering off the office selection.

I have redone the lookup but InfoPath insists on using the ID not the Title.

Anyone got any ideas?

InfoPath offers this dialog to configure a drop-down: 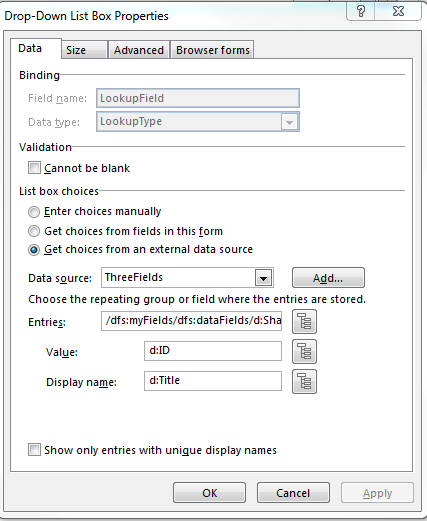 Make sure that the "Display Name" is set to the Title and the "Value" to the ID. Internally, only the ID is stored in the SharePoint list. The SharePoint view will resolve the title.

If you use a SharePoint Lookup column and edit the form with InfoPath, the settings are correct by default.

Not the answer you're looking for? Browse other questions tagged sharepoint-enterprise 2013 infopath infopath-data-connections or ask your own question.

1
InfoPath 2007 field that depend on other field outcome
1
Sharepoint 2010 and Infopath form : lookup fields are displayed by their ID instead of text value
1
How to setup Metadata Navigation to include Lookup field values?
0
Setting value of lookup Field
0
Infopath Lookup MultiChoice field